“A benign spoof on the bias people have against gays.“

In & Out is a benign spoof on the bias people have against gays (homophobia), and plays like a recycled typical TV sitcom comedy bringing out those tired old stand-up routines about gays. It’s directed with a certain flippancy by Frank Oz (“Bowfinger”), but descends into the pits when Oz wants it to not only be funny but to be taken seriously. It stars Kevin Kline as Howard Brackett a popular, perfectly groomed and bow tie wearing high school English teacher and sports coach in the same small-town of Greenleaf, Indiana, where he was raised. His farmer father (Wilford Brimley) and loving mom (Debbie Reynolds) are proud of him but can’t wait until he marries. They all get shocked when one of his former students and protégés Cameron Drake (Matt Dillon) wins an Academy Award and in his acceptance speech thanks his favorite teacher Mr. Brackett, and then impulsively says “and he’s gay.” Howard and his fiancee Emily (Joan Cusack) are stunned, but she tries to stop being hysterical when he says it must be a misunderstanding. After a three-year courtship, they are set to marry in a week. Emily has slimmed down considerably for the upcoming nuptials, and doesn’t quite know how to react to the shocking development. His folks and the townsfolk and his students initially sympathize with the kind-hearted teacher’s embarrassment but when reporters arrive in the community and create a media circus, sentiment from the locals changes. Peter Malloy (Tom Selleck), an openly gay TV reporter also in town to cover the story, suspects that the teacher is in denial.

Things start to change as the town takes a new look at their man. Howard’s principal Tom Halliwell (Bob Newhart) is visibly upset by the news (he stammers over the embarrassment that Howard actually might be gay), and is considering firing Howard. The virgin teacher tries to convince himself that he’s a heterosexual, even though he adores Barbara Streisand and reads romantic poetry; he even tries to follow the advice on a motivational tape, “Be a Man.” This mainstream comedy lightheartedly looks at this touchy subject of the acceptance of homosexuality by the public, with the idea of poking fun at those who are in the closet and those who are homophobic. It builds to a ludicrous conclusion that serves as a lecture about gay manners and sexual hypocrisy (as Howard is gently chided for remaing in the closet).

The idea for the film came when producer Rudnick heard Tom Hanks do the same after winning an Oscar for The Philadelphia Story. Hanks paid homage to Rawley Farnsworth, his drama coach from a high school in Oakland, calling him a “fine gay American.” The In & Out satire is all too obvious and hardly that amusing. The sugary ending was not only unbelievable, but too shallowly drawn to forgive for its inability to connect homosexuality with actual sex. All Oz accomplishes by playing it so safe, is to have an antiseptic spoof that instead of attacking gay stereotypes and homophobia for what it is–serves only to trivialize the hot button subject even further. 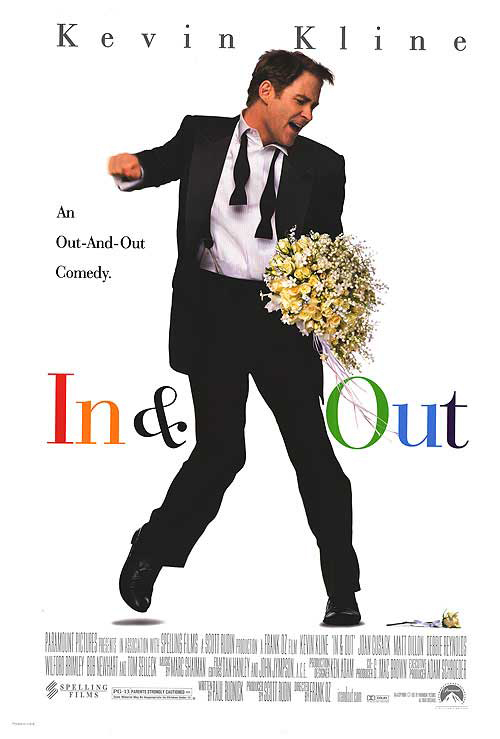