“Though it doesn’t fully explore the racial issues it raises as fully as it could have, for its time it was daring and courageous.”

The first of two film versions of Fannie Hurst’s 1933 novel (the other was by Douglas Sirk in 1958, that one took a slightly different direction from Stahl’s more faithful one to the book by making it more of a social confrontational work than the original’s character study and one of almost unbelievable discretion). Imitation of Life was nominated for an Oscar as Best Picture. The tearjerker was sensitively directed by John M. Stahl (“Back Street”/”Leave Her to Heaven”) and was one of the first films to address real racial issues and have blacks star in serious dramatic parts in a contemporary urban setting. It was inspired by the popularity of the Aunt Jemima pancake company. Though it doesn’t fully explore the racial issues it raises as fully as it could have, for its time it was daring and courageous. It also touches on a woman making it big in a man’s business world by proving to be just as smart and the travails of single moms raising their daughters.

It chronicles the chance friendship between a struggling white widow Beatrice Pullman (Claudette Colbert) and an impoverished black maid widow Delilah Johnson (Louise Beavers). When Delilah comes by mistake to Beatrice’s home looking for work, she gets hired as a live-in maid when she agrees to work for cheap telling Mrs. P. she’s only interested in getting a nice place for her daughter to live in. They both have young daughters, the white woman’s 2-year-old Baby Jessie and the black woman’s same-aged light-skinned Peola. Even though Mrs. P. is having a tough time making ends meet following hubby’s footsteps as a traveling salesman for maple syrup, she takes Delilah on. After enjoying Delilah’s pancakes, Bea gets the secret recipe and opens up on the boardwalk a pancake shop. Business becomes a multi-million dollar franchised national one when a vagrant visitor to the pancake shop, Elmer Smith (Ned Sparks), gives her the idea to “box it.” Bea puts Delilah’s likeness on the box and offers her a twenty percent share in the business (which in the movie passes for being generous, but it sure seems like a ripoff since she stole the pancake recipe), but the black woman doesn’t want the money saying she just wants to be her maid (Bea instead banks the money for her friend and keeps her on as a maid, though this whole scenario smacks of exploitation). Elmer’s rewarded with a general manager’s position. At a house party celebrating the tenth anniversary of the business, there’s a great shot of a staircase dividing the house into the upstairs, where the white Bea lives and the downstairs where the black Delilah lives. At the party Bea meets the handsome, smooth talking ichthyologist Stephen Archer, a friend of Elmer’s, and they soon plan to marry. But Bea wants her college daughter Jessie (Rochelle Hudson) to meet him first and without knowing their plans. When she returns from her college break, the three get together. Delilah then asks Bea to go with her to Virginia, where her troubled daughter ran away from a Negro college and is passing for white while working in a restaurant that doesn’t allow Negro patrons. Peola (Fredi Washington) hurts Delilah further by saying she doesn’t know her, but later returns home to tell mom she disowns her and wants to be white (this is played out to really mean she wants white opportunities). In an earlier scene, when Peola was in grade school she was humiliated that her very black mother came to school and now everyone knows that she was black. When Bea returns, she finds out that the teenage Jessie is taken romantically with the 37-year-old Archer, even though he acted properly. The film concludes with the heart broken Delilah dying and requesting an elaborate funeral (the only thing the saintly woman ever asked for herself), and a heart sick Peola returns for the funeral and feels miserable over how selfish she acted. Bea keeps her promise to her friend and looks after her, as Peola agrees to return to college. Bea then puts off her wedding to Archer until she’s sure that Jessie’s love for him has vanished. He agrees to wait when he sees he can’t change her mind.

The liberal film manages to make its way through a minefield of sincerity, melodrama and racial divides from the America of the 1930s without blowing itself up, which was quite an achievement for a back then Hollywood film–something not to be sneered at. 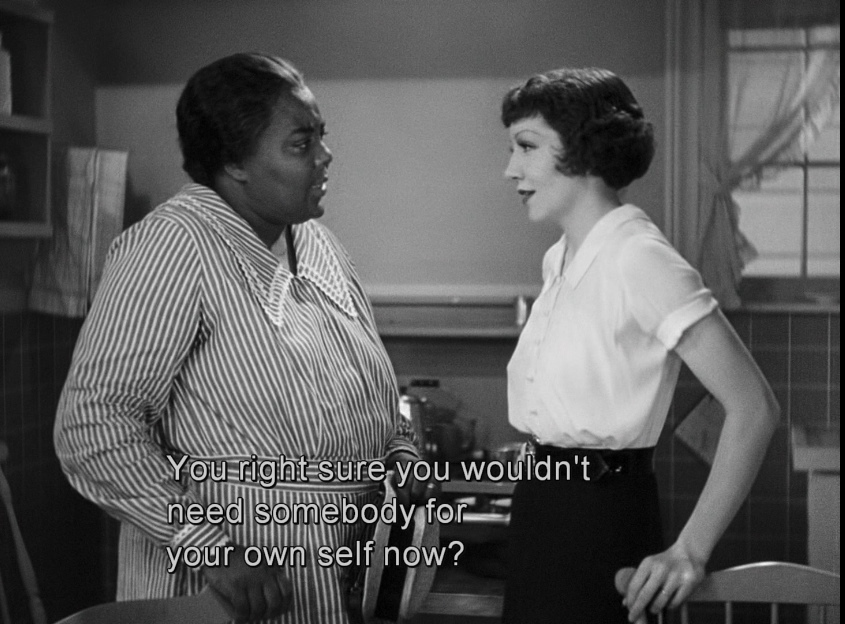