“This is a glum but intellectually sound film…”

A meditative film based on a Polish student in his twenties, Franciszek (Stanislaw Latallo), who questions life in the ’60s while studying physics as a college student. He achieves his doctorate several years later and is also diagnosed with a fatal heart condition. The graduate soon turns more philosophical about life.

Franciszek goes through his first romance with an older woman (Denisiewicz-Olbrychska) and then is rejected. He marries someone else (Malgorzata Pritulak), has a son, and despairs as a close friend dies. He feels restless, becomes financially insecure while searching for something meaningful in his life, and can do nothing but watch as his marriage turns sour. Franciszek then seeks religion as an answer but comes back to his wife and a career in science, as this pretty much sums up the plot of this very difficult to achieve but easily recognizable quest by many students all over the world in the ’60s. The student grows up when he realizes it is almost impossible to ask for absolute answers and as he says, even the great Einstein had to abandon that aim.

When he accepts full responsibility for his life and tries to become economically secure his life changes; it, strangely enough, becomes limited as his imagination can no longer run free.

The concept of illumination, whence the title of the film comes from, refers to St. Augustine’s theory of enlightenment. It is what fills the mind with light; it is a spiritual happening that is the most powerful thing in the world.

The hero is likable, somewhat courageous and scholarly, a person of integrity and loyalty, and is the only hope for Poland’s future. This is a glum but intellectually sound film, offering many pleasurable introspective moments. The director, a student of science himself, seems to be under the impression that the person of science is the most interesting person in the world because he holds the key to knowledge. That is certainly arguable, as even the protagonist eventually realizes not everything can be settled by rational arguments. 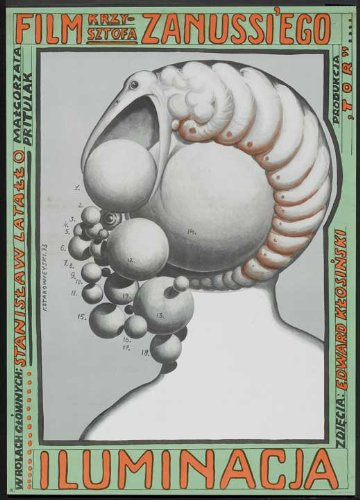 I WAS A TEENAGE ZOMBIE