“Atmospheric post-noir film of the London underworld that never amounts to much of anything.”

English director Mike Hodges (“Croupier”/”Get Carter”) creates a stylish, moody, atmospheric post-noir film of the London underworld that never amounts to much of anything. It suffers from an inadequate story line, superficial study of characters, confusing mysterious developments that are never explained, and a dull pace that leads to nowhere in particular as it traverses the nighttime streets of London’s beautiful people and the rough South London streets of Brixton where the gangsters rule. The inexplicable script can be attributed to Trevor Preston, a British TV writer whom Hodges worked with on TV documentaries in the 1960s.

A familiar plot line about revenge and remorse unfolds in a predictable way until it strays from its predictability to offer an unsatisfying climax that is almost completely unclear. It’s a tale that could fit a number of Clint Eastwood Westerns until it takes a wrong turn down some twisted psychological back street, where it loses itself in its own academic explanations of motive for rape, its dark intentions to be a stunner and unintelligible plot machinations.

Will Graham (Clive Owen) is a ruthless Cockney criminal, poker-faced and taciturn in a long tradition of such Brit filmland hoods, who three years ago gave up London and his older restaurant owner girlfriend Helen (Charlotte Rampling) for penance and self-exile because of a mysterious spiritual awakening, and was last working in Scotland as a scruffy bearded lumberjack living out of his van. When Will gets laid-off he returns to London and learns from the landlady (Sylvia Syms) while visiting his beloved kid brother Davey (Jonathan Rhys Meyers), that he gruesomely committed suicide by cutting his throat while soaking in his tub. Enlisting the help of Davey’s friend Mickser (Jamie Foreman), Will learns Davey was into the soft money scene of selling party drugs to the beautiful people and through his charming insincere personality scoring as many chicks as possible. They come up with no enemies for the small-time drug dealer, but Will learns from the coroner’s report that Davey was raped. When Will relentlessly tracks down the rapist, a once criminal but now respectable car dealer and family man (Malcolm McDowell), he stalks him and moves in for the kill anxious to know why he so brutalized his brother. When the answer given is that he was jealous of how cool Davey was and how his good looks attracted so many fine chicks, and he therefore sought to reduce him to the nothing he really was–I was ready to fall asleep on this one before I died of boredom.

Meanwhile a sidebar story runs parallel to the revenge tale involving Frank Turner (Ken Stott), a neighborhood crime lord who has taken up the vacuum left by Will’s departure and threatens him with harm if he remains in London. Will’s former henchmen welcome him back with open arms, and let him know they fully support him when he’s ready to take action against Turner. Though Will tells them he didn’t come back for that, they feel confident he can’t change.

Unfortunately the dreary story is humorless, never involving and even the payoff revenge scene is much too enigmatic to register with any conviction as anything more than a tale of a brother avenging his brother’s killer. The only thing Hodges renews from his superior Get Carter and successful Croupier, is the tough-guy swagger of those loner heroes walking on the edge. Otherwise, this is a forgettable B-film searching to rise above its crime genre roots and be something arty, but is stuck with its vicious buttfucking story and humiliation suicide tale that smacks of a possible hidden homophobia reaction to all that hysteria manifested. 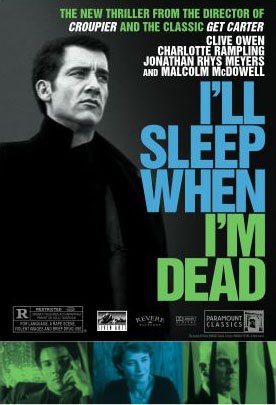