“It’s a taped live TV performance of The Play of the Week on National Educational Television, reminding us of the greatness that could be found in early TV’s Golden Age.“

It’s a taped live TV performance of The Play of the Week on National Educational Television, reminding us of the greatness that could be found in early TV’s Golden Age. Eugene O’Neill’s acclaimed play, first staged in 1939, is re-staged for television. It’s flawlessly directed by Sidney Lumet (“The Hill’/”Fail-Safe”/”The Verdict”). Executive producer Worthington Miner and legendary NY Times theater critic Brooks Atkinson introduce it as one of America’s great plays.WithAtkinson stating it’s a harsh and ruthless drama depicting coarse individuals, and that the play was intended for those who are mature and sensitive.

Set in 1912 New York, in a rundown Bowery-like saloon. The seedy deadbeat bar of Harry Hope (Farrell Pelly) is filled with parasitic regular customers, all in self-denial about their failed lives. The loser clientele includes failed revolutionists, con artists, dishonored soldiers, a crooked cop, burnouts, a black guy out of his milieu, cheats, losers, drunks, hookers and passive false dreamers. The owner, who has given up on life, welcomes these fellow misfits and has not left the premise for twenty years, or ever since his beloved wife Bessie died and left him filled with self-pity. Harry is satisfied that his saloon and hotel manage to break even, and that he could be looked upon as a good guy by those he doesn’t demand payment from when they claim to be broke only that they treat him with utmost respect.

The saloon clients are looking forward to celebrating Harry’s birthday party at age 60. Expected to attend is the likable married traveling salesman from Queens, Hickey (Jason Robards), who comes to the saloon twice a year and generously treats everyone to booze, tells bawdy jokes about the iceman cometh, regales them with colorful stories and accepts them for what they are. They always feel good after a visit from the boozing charismatic salesman.

But this time the glad-handing Hickey shows up as a changed man, and his new seriousness disappoints the regulars–thinking he’s turned into a wet blanket. We learn that since Hickey’s long-suffering wife died he’s off booze and has reformed–no longer carrying around his guilt and hiding behind empty pipe-dreams. He now lives only for today, and is glad that his wife has found peace in death and no longer has to put up with a cheat, a drunk and a good for nothing. His new attitude disturbs all his old pals, who are challenged by him to also change but can’t admit the truth of their wasted lives when he prods each to face the truth.

That he’s not going on a bender doesn’t stop Hickey from getting food and champagne for the party, and giving Harry a cheerful toast.

The play’s most memorable moment is a 45-minute soliloquy by Robards. The most interesting patrons include a disillusioned know-it-all old anarchist, Larry Slade, played with distinction by Myron McCormick, who comes unraveled by Hickey’s prodding. Tom Pedi, as the tough crass bartender, who acts as a pimp to two of the hookers, but is in denial that he’s a pimp. The 23-year-old Robert Redford, in his first major performance, plays a lost soul who needs help in understanding why he turned in his bomb-making anarchist mother from California and has come cross-country to seek answers from mom’s wary old boyfriend Larry. James Broderick plays someone still young but who was too scared to begin to practice law and degenerated into a friendly bum who sings Irish ditties.

The ensemble cast are all top-notch in this faithful production of a masterpiece play, who bring out with great sensitivity from their troubled characters various degrees of pathos, comedy, tragedy and their underlying humanity. An intelligent film, that remains lively despite being so lengthy. 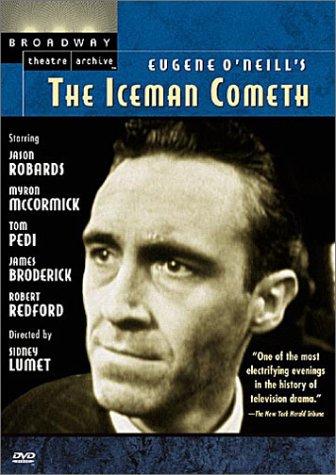