Based on the autobiography of Robert Elliot Burns. It’s a depressing pic (one of the most pessimistic films ever made, especially the downbeat climax), but that didn’t stop it from being a big box-office hit and nominated for an Oscar for Best Picture (it lost to Cavalcade) and Best Actor (Paul Muni lost to Charles Laughton for his performance in The Private Life of Henry VIII). This is a hard-hitting Warner Brothers crime drama, forcefully directed by Mervyn LeRoy (“Little Caesar”). It serves as a transitional film that differs from the usual action crime dramas of the era to one that now offers a sound social commentary on justice and the importance of social change, and though dated and heavy-handed in parts of its commentary it still stands as one of the most powerful indictments against the brutalities of the chain-gain system. Paul Muni gives a heart-wrenching performance as a good guy wrongly convicted of a crime and forced to endure the dehumanizing punishment of a Georgia chain-gang.

James Allen (Paul Muni) after returning home to his small-town in Lynndale from World War I, a much decorated sergeant in an Engineers Corps, is reluctant to return to his monotonous but secure shoe factory job as a shipping clerk, which confounds his conservative Middle-American family. Instead, James receives his mother’s (Louise Carter) blessing and opts to leave town to follow his dream and try to find an engineering job. After several years on the road in New England and St. Louis, James is out of work and heads South. The hungry unemployed vagabond is befriended in the flophouse he’s staying at by an experienced hobo named Pete (Preston S. Foster), who tempts him with the possibility of panhandling for a free hamburger at a diner. After the meal, Pete sticks up the cook and forces a bewildered James to grab the $5. When the police rush in, they kill Pete. James gets convicted for the armed robbery and is sentenced to 10 years in a Georgia chain-gang. Unable to endure the harsh treatment of daily beatings and torture, James escapes North. He changes his name and soon lands a job with a construction-engineering firm and proves himself knowledgeable as he works himself up the ladder to a top position as a civil engineer. But his hard luck continues when he meets the wrong woman, Marie Woods (Glenda Farrell), his landlady. The low-class woman blackmails the good catch (the gold-digger views him as a potential big earner) into marrying him when she learns through a letter his reverend brother (Hale Hamilton) sends that he escaped from a chain-gang. When James threatens to leave his crude wife for the respectable Helen, a classy society lady he met at a business party, his wife gets so irate that she rats him out to the authorities. Again, the hard luck regular guy makes the wrong decision and believes the southern representative who tells him if he volunteers to be extradited he’ll receive a pardon in 90 days. In a mind-blowing statement to the press to counter James’s exposé on the cruelties of the chain-gain system, the representative says James’ outstanding contribution to society can be attributed to the chain-gang’s ability to build character. When James returns to serve out a supposed 90 days as a trustee in a clerk job and then get a full-pardon, the pardon board reneges on the deal and James is placed on the chain-gang to serve out his full term. He escapes again, and in the last scene appears like a wounded animal always on the lookout for those hunting him–no longer willing to trust civilization and build for the future, he’s now willing to be destructive as evidenced by him blowing up a bridge in order to escape.

The scenes of the chain-gang are haunting, and still pack a powerful wallop depicting institutionalized savagery. The film was made at a time when there was the veterans’ Bonus March on Washington in 1932, where the disgruntled war veterans raised the issue about their lack of benefits (which they had been doing ever since the 1920s). This film was so necessarily pessimistic because it played into that protest and used the viewers experience with the Great Depression to ground it in such a bleak fashion (though the story is set mostly during the 1920s and ends at the beginning of the Depression in the 1930s) to show how civilization was losing its humanity by not caring about how fairly its citizens were treated. 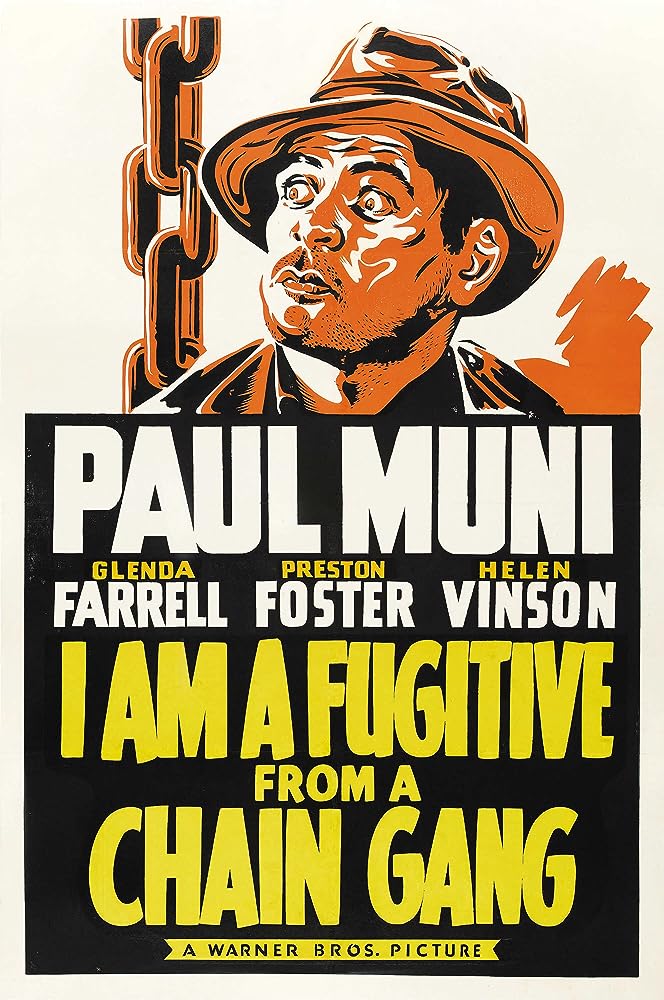