HONK FOR JESUS. SAVE YOUR SOUL.

First-timer Adamma Ebo shoots her scathing satire on organized religion in the style of a mockumentary mixed in with a conventional filming, and produced it with her twin sister Adanne. Their feature is based on their 2018 short film of the same name. It rips into the hypocrisy of the evangelicals and how they use religion a s a source of making money. But the film is too long and goes no further in probing than its spoofs on the televangelist crowd.

Lee-Curtis Childs (Sterling K. Brown) is the filthy rich disgraced pastor of the Wander to Greater Paths Baptist mega-church in Atlanta, Georgia. After a sex scandal, the church was shut down, and most of the congregation relocated to a nearby church, for their Easter opening, in a Baptist church run by the young married couple, Shakura (Nicole Beharie) and Keon Sumpter (Conphidance)–mirror images of the fallen Childs’.

Hoping for a come back, Lee-Curtis’s equally greedy wife, the first lady Trinitie Childs (Regina Hall), to help her egotistical and delusional husband regain his church, whom she stands by, invites a film crew, led by an unseen filmmaker Anita (Andrea Laing), to shoot the couple’s comeback after the scandal led to their downfall. But only five of their former 25,000 congregants return.

The religious frauds have big appetites for luxury cars and goods, and to sit in church on matching thrones.

The narrative is told from a Southern Black perspective, as it questions if these show business operated for-profit churches can ever replace the family-value old-fashioned Baptist churches to serve the community. 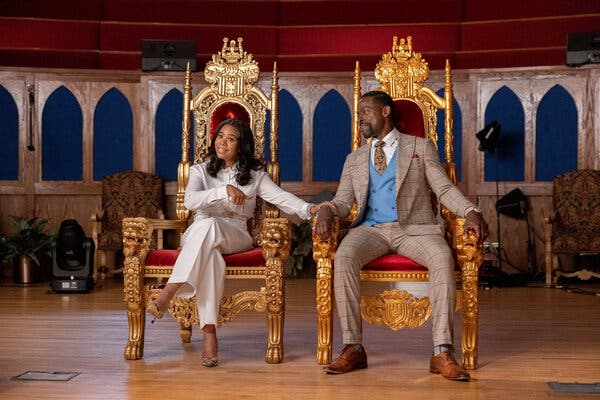 AFTER THE THIN MAN