“There was something emotionally flat and unconvincing about this story that not only rubbed me the wrong way, but made me think how apologetic the filmmaker was to the real events of history. “

It is 1935. The German group called The Comedian Harmonists are at the height of their popularity. They are world famous and we see them formally dressed in tails performing on stage one of their favorite harmonies, “Veronika.”

The film flashes back to Berlin in 1927. The weak Weimar Republic is in power and will remain so until 1933, when Hitler’s Third Reich took over and put its anti-Semitic policies to work. This will provide the backdrop for this true story as it tells about the rise and fall of the musical group and their personal lives and the events in Nazi Germany that made it impossible for them to exist as they once were, since half of their six members were Jewish and Jews were no longer allowed to publicly perform in Germany under the Nazis.

Harry Frommermann (Ulrich) is the unemployed Jewish actor (and dead-ringer for Robert Benigni) and self-taught musician and baritone, who tells his agent that he is a musician not an actor. The agent is cynical about Harry’s alleged ability to arrange music. He informs him, “There are 3 million unemployed Germans on the streets who are arrangers.”

Harry runs an ad in the paper after hearing a record of an American Negro group called “The Revellers” singing in harmony. He is further influenced by the music of Duke Ellington. He now thinks that he could put together such music for a German capella group, consisting of five singers in harmony with a piano accompanist. The first one that he hires for the group is the very Aryan looking, Robert Biberti (Ben Becker), the son of an opera singer, with an untrained but beautiful voice, who then gets the rest of the group together from among his acquaintances: Roman Cycowski (Heino Ferch), born in Poland, who wants to perform at the grand opera and will become a cantor in America when the group is disbanded in the late ’30s; Erich Abraham Collin (Heinrich Schafmeister), has just passed his exam at the conservatory; Ari Leschnikoff (Max Tidof), a gifted Bulgarian tenor, who is working as a singing waiter; and, Erwin Bootz (Kai Wiesinger), a barroom pianist, completes the group as the non-singing member. Then came long hours of practice without being paid as they worked on getting their syncopated sound together and their full routine of double-entendres, such as their “Asparagus are Sprouting” number. Some of the other lighthearted songs they sing are, “Beautiful Isabella From Castile” and “When Yuba Plays the Rumba on the Tuba.”

Their big break comes as they audition for a revue show and get the job, as Bob puffs on his big cigar and boldly works out the financial arrangements for the group. Then recordings follow and sold-out concert appearances and tours throughout Europe.

The clash between Harry and Bob is over a music student and part-time employee at a music store owned by an elderly patriotic Jewish couple, the very attractive Erna Eggstein (Meret Becker) whom they both fall in love with. Incidentally, she is the real sister of Ben Becker. The romance between Harry and Erna starts first as Harry shyly pursues her, encouraged by her only too willing consent. Harry must first go to the grave site of his parents and tell them that he has fallen in love with a non-Jewish woman. When Bob meets her he also falls for her, having led a wild bachelor’s life he knows instinctively that this is the one for him. When he takes her to a boxing match, he finds that Erna is dissatisfied that Harry doesn’t pay her enough attention and does not take her studies seriously. So when Bob asks her to move in with him she does, even though she still loves Harry.

This is a time of great change and upheaval in Berlin, and there is an international flavor in the air. Therefore there are great changes in the way people relate to others. Bootz will live with a Polish Jewish girl, but will dump her when the Nazis are starting to flex their muscle in the mid-thirties. Roman’s Aryan fiancée will convert to Judaism. Collin, the third Jew of the group, will marry a French prostitute working in the red light district of Berlin.

As far as the Nazis, their hatred is very apparent and very gripping across all levels of society during this time. This film takes, in my opinion, an erroneous view of their activity by soft-pedaling it and stating that it was only among the lower-classes that anti-Semitism was prevalent. That the upper-classes and the cultured-classes were generally supportive of the Jews. This is just not true. It is a rewriting of history that is not based on the facts. Daniel Goldhagen’s book, “Hitler’s Willing Executioners,” makes it clear, leaving no doubt, that anti-Semitism was rampant among all classes. The majority of Germans were anti-Semites, and there is no getting away from that. And, just because the group continued to have sold-out concerts after it became known that there were Jews in the group and that the notorious Nazi Julius Streicher, publisher of Stürmer (a major Nazi newspaper) and a fan of their music, was able to grant them special permission to continue performing during this difficult time does not mean that Jews weren’t persecuted at that time. That is just ignoring the truly horrible and pervasive Nazi reign of terror that began then but didn’t really go into full blast until Kristallnacht in ’38. But the anti-Semitic policies were certainly more wide-spread in the early 1930s than what what the film portrayed. It should also be noted that Streicher was executed as a Nazi war criminal, as a result of the Nuremberg trials (he was not a good guy!).

There is one scene that shows the Nazi S.A. Brownshirts in action. We see how it is directed against the Jewish music store owners who can’t understand what is happening to their country and why they are being singled out and why their store is being smeared with anti-Semitic messages, asserting that their son died fighting for Germany in the last war. The Holocaust came a few years later; but, there is no doubt that the initial plans for the “Final Solution” were underway, even if there were a few Germans who were not filled with hatred. Erna would be one example.

The scene when the group comes to perform in New York on board the USS Saratoga, gets everything it can about that scene wrong. New York never looked so unreal and artificial and cardboard-like. The real problem the group has in New York is whether they should return home or desert Germany, as a conflict develops over this matter between Bob (who doesn’t want to leave his elderly mother alone) and Harry, who sees the handwriting on the wall in Germany, and feels he has nothing left there. But it is settled when the rest of the group decides to return to a changing Germany. Their country is now being purged of its international communistic and bourgeois influences, in favor of nationalism, by the intolerant Nazis who have taken complete control of the arts.

Their final concert is a standing ovation triumph to their popularity, even as they are forced by Nazi law to disband the group. There is a crush of people surging onstage to give them warm support and encouragement. As a result, two groups are formed: the Jews leave Germany and play in exile (actually having great success in Australia), and the gentiles stay in Germany. Eventually, neither group can be successful separately. The internationalism of their music loses favor during the war and both groups disband by 1941.

In an epilogue, it is mentioned how all the members survived WW11. All the Jewish members went to America as did Erna, who married Harry; but, later on, divorced him in the early 1950s.

There was something emotionally flat and unconvincing about this story that not only rubbed me the wrong way, but made me think how apologetic the filmmaker was to the real events of history. He tried to force-feed the audience into believing so many untruths about what actually took place, that it is hard for me to say that this film made up for its distorted history lessons with its pleasing music and delightful cabaret-like mood and its splendid cinematography. Its call for the world to be less nationalistic and more global minded had a pleasing ring to it, but that is simply not enough to counter how tame the film appears as a whole. 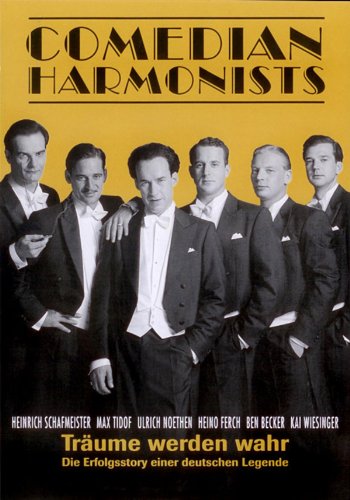