“A high-class soap opera about eight women graduates in 1933 from Vassar.“

A high-class soap opera about eight women graduates in 1933 from Vassar and their changing lives from graduation until the beginning of the second World War. Director Sidney Lumet (“Equus”/”Q & A”/”Deathtrap”)does a nice job adaptingMary McCarthy’s 1963 bestseller novel with writer Sidney Buchman, as they prune the lengthy formless novel down into a number of lively watchable scenes that captures the period, the romances and how the girls evolve during the significant years after graduation.

The pic covers all eight girls. The insecure Kay (Joanna Pettet) is the first to marry and the first to die, as she in 1939 accidentally plunges to her death from a hotel room during a nervous breakdown thinking Hitler’s planes are attacking Manhattan. The pic’s early scenes show Kay’s happy wedding at St. Mark’s church in Manhattan and the film ends at her funeral. Right after graduation Kay weds aspiring playwright and struggling Greenwich Village theater manager Harald Peterson (Larry Hagman) and takes a job as a sales clerk at Macy’s to support him. The marriage is a bummer, as he turns out to be a wastrel, philanderer and alcoholic. The group’s beauty is Lakey (Candice Bergen, in her film debut at 19), who only has a few scenes but is a knockout in them. Lakey is an aspiring artist, who after graduation goes vacationing in Europe and it’s revealed in the end that she’s a lesbian as she brings home a mannish looking German countess. Joining Lakey in Europe isthe class valedictorian Helena (Kathleen Widdoes), the daughter of a wealthy steel industrialist.She’sthe group’s artist and chronicler, whose father does not allow her to be a nursery school teacher and thereby in rebellion to prove she can make it on her own remains in Europe unmarried and collects art.Shirley Knight plays the sweet Polly, who works in a hospital and falls in love with an insecure married doctor who is being psycho-analyzed. Polly later finds true romance with a young doctor (James Broderick) and marries him. Libby (Jessica Walter) works as a reader for a handsome editor (Hal Holbrook), but even though she soon rises in position to become a literary success in the publishing world her frigidity dooms her personal life and she remains popular only as a nasty-tongued gossip. Dottie (Joan Hackett) is the Boston society girl who spends a night with struggling Greenwich Village bohemian artist Dick Brown (Richard Mulligan) and has her sexual awakening. But the insincere womanizing asshole dumps her after their one-night stand and in humiliation she bolts for Arizona. Dottie returns to NYC, after years away in the desert, to visit the group and remains for Kay’s funeral. Dottie is now happily married to a wealthy oil man (George Gaynes), who speaks with authority in a rich baritone voice. Mary-Robin Redd plays the wealthy ditzy Pokey, who leads an uncomplicated life and gives birth to twins. Bleeding heart liberal Pris (Elizabeth Hartman) is forced to give up her dream of working for President Roosevelt’s poverty program when Congress refuses to finance it. Frustrated, she marries a headstrong bullying pediatrician and has two miscarriages before finally giving birth to a son. Her husband forces her to breast-feed and it results in a physically weak mother and a spoiled child.

The Group was not a commercial success, despite its rep as a scandalous sexual tell all book with mass appeal. But over the years it has become a cult favorite and is enjoyable probably because it mixes its soapy story with a few fascinating scenes enacted with great skill by its talented unknown, newcomer ensemble cast. It’s an uneven work that eschews any depth in its character depictions; but is both, at times, amusing and tragic in ways that are oddly interesting. Through the excellent photography of Boris Kaufman, it’s also good on period detail and an easy watch despite its length. 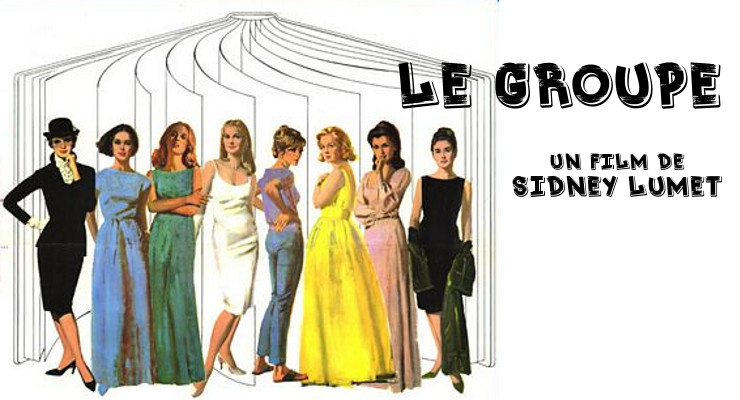