“More atmospheric and gloomy than suspenseful.”

A diabolical occult mystery story about the cruel primitive rituals of an ancient pagan religion in a small wine village in the Bordeux region of France. Under the artful direction of J. Lee Thompson (“Tiger Bay”/”The Guns of Navarone”) the grim story is more atmospheric and gloomy than suspenseful. It’s based on the 1964 novel “Day of the Arrow” by Philip Loraine. It’s written by Dennis Murphy and Robin Estridge, that is completed after many cuts of the controversial occult material from the previous writers.

A miscast Deborah Kerr (the 45-year-old can’t carry the film, even if the only one in it who seems like a real person) replaces Kim Novak (also supposedly disappointing in the role), who withdrew after a back injury and with eighty-percent of the film completed (therefore requiring many retakes).

The American-born Catherine de Montfaucon (Deborah Kerr) lives happily in London with her French nobleman husband Philippe de Montfaucon (David Niven) and two young children, the older adolescent Jacques (Robert Duncan) and his younger sister Antoinette (Suki Appleby). The marquis has not been back to his vast French vineyard since the children were born. When a messenger from Philippe’s village comes to London and informs him while he attends a harp concert that he must return home because the wine crop has failed for the third straight year and the locals are starving, he immediately goes home alone and leaves his dismayed wife in London.

Catherine, meaning well, soon brings with her the kids to visit even though he insisted she stay in London. She finds him noe as a secretive,  a troubled and preoccupied man, who says no one can help him and wants her to leave.

It turns out the marquis is a believer of the village’s pagan religion and twisted beliefs in God, as they follow the ancient superstitious customs of human sacrifice no matter if it doesn’t make sense to outsiders or the modern world. Under the heretical religious leader Pere Dominic (Donald Pleasence), the marquis nobly complies with village customs and the film holds no further surprises. It has Catherine as the frightened woman trying to deal with the madness she’s surrounded by while trying to save her husband.

Christian de Caray (David Hemmings) plays the scary warlock bow and arrow executioner and his equally scary witch sister Odile de Caray (Sharon Tate, in her film debut, who 3 years later was murdered by the Manson family) is always by her brother’s side. The sinister Odile impresses the kids by turning a toad into a dove and frightens the wife, who while on the castle’s high ramparts is bewitched to think she’ll fall to her death. The Countess Estell, Philippe’s mother, is played by Flora Robson with a blend of aloofness, sternness and creepy despair.

The black and white photography by cinematographer Erwin Hillier eerily captures the ominous flavor of the estate by showing the ancestral castle that dominates the landscape, the Satanic rituals acted out in the castle by 12 men in hooded black robes and how creepy the peasants look. The photography keeps the film engaging, but the story is only average and is only a warm-up for the great horror pic to come soon \– The Wicker Man. 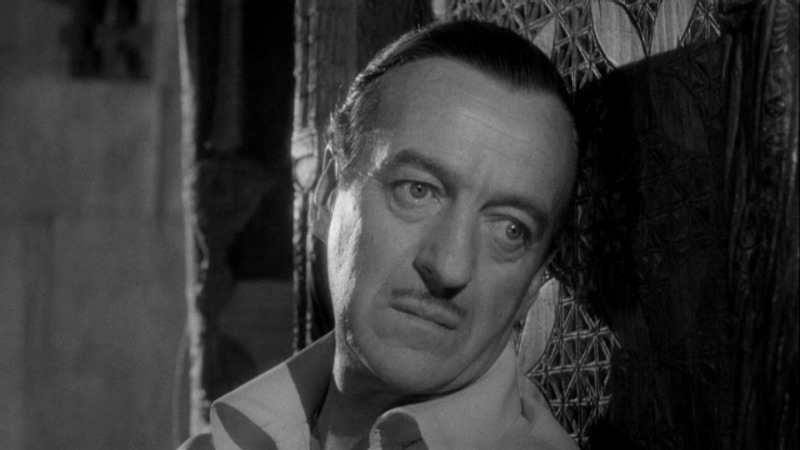