“The simple storyline can’t convey the many amazing scenes you get in an Ozu film that few other filmmakers are capable of delivering.”

Yasujiro Ozu (“Late Autumn”/”Tokyo Story”/”Late Spring”) examines life in postwar Japan through the eyes of an unhappy young white-collar office worker who questions his career, his future and his marriage. Regular screenwriter and companion Kogo Noda is Ozu’s cowriter; their screenplay shows respect for the younger generation of oppressed salarymen and their economic plight, despite being envied because they have a steady job. One character says “Babies come faster than raises.”

The old-fashioned filmmaker was encouraged by his studio, the Shochiku Company, to cast bigger name stars and have a story that involved the younger generation. In 1956, for the first time in decades, the company fell into second place behind the new and more modern Daiei. Early Spring is an effort to make the plot more melodramatic by having scenes of sexual intrigue and making the film more youth oriented. Ozu said “I wanted to portray what you might call the pathos of the white-collar life.”

The black-and-white film is shot in Ozu’s usual minimalist style, featuring long close-ups and little camera movement, and covers his usual domestic dramatics; but this film is more melancholy and even mournful of a faulty past that cannot be recovered and a future that seems bleak and pointless.

The film’s title may be an oblique reference to Early Spring, a 1942 collection of patriotic essays by Naoya Shiga.

A thirtysomething married salaryworker, Shoji Sugiyama (Ryo Ikebe), commutes to his office job in Tokyo by train. During a hiking outing, among his regular commuters, he’s seduced by a flirtatious typist in the office typing pool, who is called by the nickname of Goldfish (Keiko Kishi) because she always has big eyes. Shoji has a one-night-stand with her. He lies to his wife, Masako Sugiyama (Chikage Awashima), telling her he stayed overnight with a sick coworker. Shoji’s office friends love to gossip and catch on that the two are having an affair and make her cry when they harshly quiz her. Goldfish becomes so upset that she comes late at night to Shoji’s home to seek advice and comfort from him. Her visit confirms Masako’s suspicion that her husband has been unfaithful. At the same time, Shoji decides to accept a transfer, not an immediate promotion, to work in Mitsuishi. It’s a dull small-town that’s located in a remote mountainous region. Masako is still seething and stays home in Tokyo with her restaurant owner mother and younger brother. But the middle-aged widower, Onodera (Chishu Ryu), a friend of the family, who is a senior employee at the same Toa Fire-Brick Company and was transferred to the provinces, intercedes on his behalf by writing his wife a letter. Onodera, who represents what Shoji will become, conveys to Shoji that a company is a cold place and no replacement for a wife. The letter seems to have brought the jealous wife to her senses and she reconciles with her husband in the rural area, saying they will make the best of the three year assignment (and for that matter their childless marriage).

The simple storyline can’t convey the many amazing scenes you get in an Ozu film that few other filmmakers are capable of delivering. The hearty singing and warmth conveyed by the office friends of Shoji at his farewell party, the office workers asserting that their office is a jail and their best pleasure is playing mahjong or having a noodle supper, a loyal 32-year-old bachelor office worker who loved his job commits suicide with an overdose of sleeping pills and at a reunion celebration of Shoji’s wartime buddies the drunken men tell of eating dog food in China.

Somehow Ozu finds dramatic depths in such ordinary lives, and even the adulteress is made to look human: she’s the only one in the group who can freely express her feelings and what she wants. The story unravels at a slow pace, giving time for the characters to become familiar to the viewers. There’s also a great deal of beauty in the way the story unfolds and it’s most affecting the way modern Japan’s unskilled workers are put under the lens to show their daily drudgery, while to the world Japan’s postwar economic boom is looked upon as a miracle. 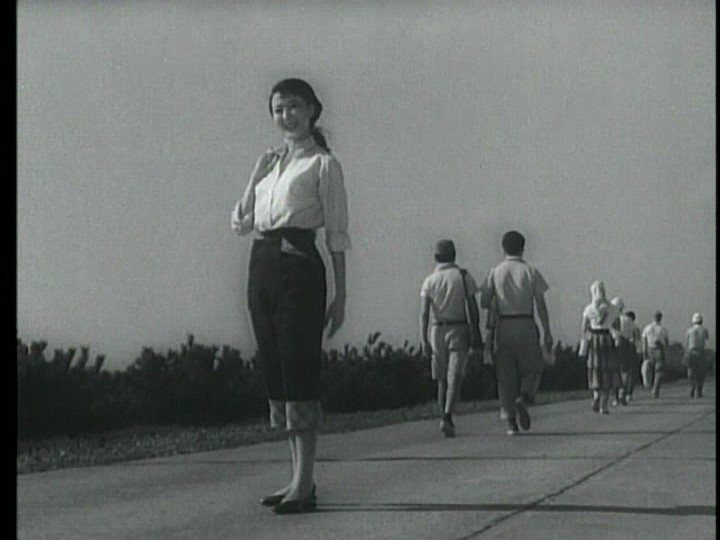