DOCKS OF NEW YORK, THE

“Seedy waterfront silent melodrama that sizzles with a smoky atmosphere.”

Josef von Sternberg (“Morocco”/”Shanghai Express”/”Dishonored”) helms and Jules Furthman writes this seedy waterfront silent melodrama that sizzles with a smoky atmosphere and a taste for amorality. It covers the single night of shore leave for bad boy steamship stoker Bill Roberts (George Bancroft). He goes to the rough-and-tumble Sandbar, a bar of ill-repute near the New York wharf on the East River. On the way he saves the life of a good-time girl named Mae (Betty Compson) trying to commit suicide by throwing herself into the river, who only tells him “You coulda saved yourself the trouble an’ let me die.” The drunken ruffian steals from a pawn shop some swell clothes for her, while the local whore, Lou (Olga Baclanova), who lives in an apartment above the Sandbar, feels kinship sympathy for the sad-eyed gal and tries to help revive her. No one calls the police. Bill drinks a barrel of beer and when through tosses it across the room against the bar wall’s netting. Lou’s good-for-nothing long-lost husband, Andy (Mitchell Lewis), reappears after a three-year absence. He’s the third engineer aboard Bill’s boat. Andy ogles Mae in the apartment and, when in the Sandbar, after making a play for her, gets into a fight with Bill and gets socked in the jaw. Bill fills the sassy Mae with hope that he can be her savior and protector, even though in her heart she knows he’s no good and can’t be depended on. He’s been around the world sailing the seven seas and his arms are filled with tattoos of past female conquests. The salty tough guy gets so carried away with the moment in his drunken state that he proposes to Mae, who accepts in the hope that this will make her a decent woman. Even though they don’t have a marriage license, they get a local parson (Gustav von Seyffertitz) to perform the makeshift wedding ceremony in front of the leering drunken bar patrons who jeer in contempt and poke fun at the ceremony. Lou provides the marriage ring by giving up her own ring, saying she hopes it brings her more luck than she had with it. It now becomes a question if Bill will ditch her in the morning as just another adventure, as is his usual way, or stay around and try to give the ridiculous marriage a shot.

The story plays second fiddle to the powerful visuals, which are due to the brilliant camera work of cinematographer Harold Rosson; it’s also greatly helped by Hans Dreier, the art designer, providing the perfect dive set for this moody von Sternberg sang-froid love story that takes passion to levels of immeasurable insanity. 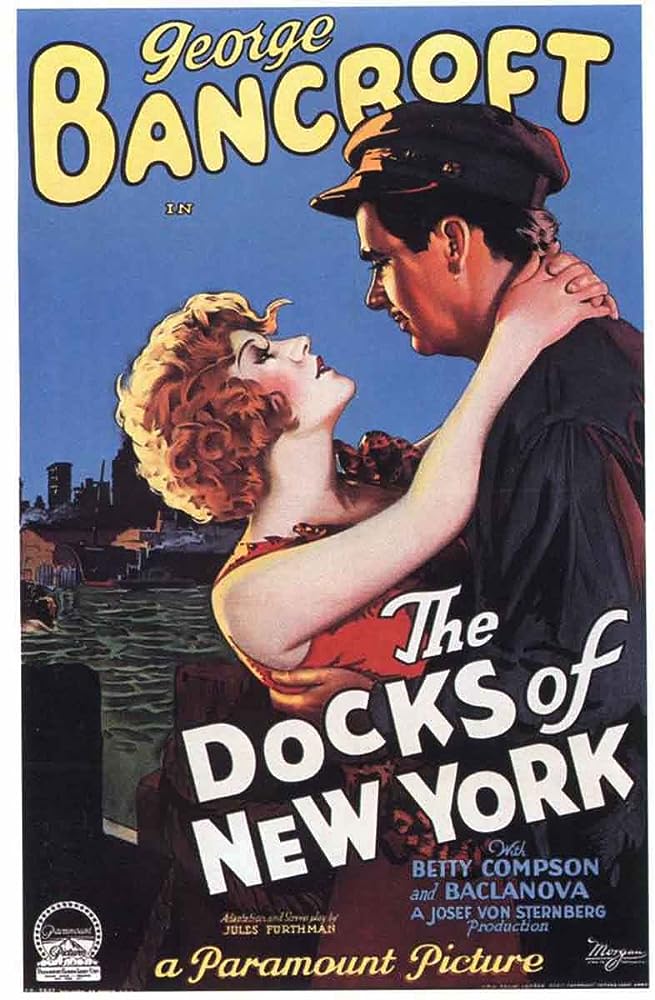