“This is a bizarre film, a precursor to Welles’ Touch of Evil and Polansky’s Repulsion.”

A very curious and strange b/w film, which is a hard to classify oddity, involving the nightmare of a lonely, sexually repressed, psychotic woman, called in the titles The Gamin (Adrienne Barrett). There is no dialogue or narrator in the first version I saw, but in the other version Ed McMahon does the narration.

The film plays as a surreal nightmare for The Gamin who is in a skid-row Hollywood hotel, where she imagines that she is taking a walk in the ocean and disappears in a giant wave. What follows is a visionary tale of Freudian images and familiar sights from those B-movies after WW11.

When The Gamin goes to open the bureau drawer and finds a switchblade knife she takes it with her as she leaves her room to go out at night, walking down the stairs to witness a beat cop arresting the abusive husband of her downstair’s neighbor. The Gamin then walks in an alley of winos. When one of the winos grabs her and refuses to let go, her detective father (Ben Roseman) gets out of his police car and beats the wino up, while she stands by gleefully laughing.

A midget newspaper vender sells her a copy of the Hollywood Tribune, whose headline is ‘Mysterious Stabbing.’ She is then picked up by a villainous smoothy, with a slim mustache, dressed in a black shirt and tie. The Evil One (Barron) takes a flower from the flower girl for his lapel and then sells The Gamin to someone who looks like Orson Welles, The Rich Man (Bruno Ve Sota), who takes her for a ride.

The Evil One takes her to the Club Pronto, where he smokes a big cigar and they watch a sexy female dancer perform. Demonic memories come back to her of her father sitting in bed in his undershirt, drinking whiskey and slapping her, and of her mother dressed up while lounging on the sofa eating some sweets. In the background is a cemetery with gravestones for The Gamin’s father and mother. When the father discovers a cigar in the ashtray from another man, he shoots his wife. The Gamin then sticks her switchblade in his belly.

These are some very weird Freudian dream sequences. In another scene, The Gamin goes with The Rich Man to his apartment and listens to him play the piano then he rebuffs her offer of a drink, instead he sits down to the elegant meal his butler brings him eating the chicken with his hands. When The Rich Man goes to kiss her after the meal, he repulses her and becomes The Gamin’s second stabbing victim. But The Rich Man grasps her pendant while struggling, which The Gamin will get back when she cuts off his hand. The narrator tells The Gamin not to be afraid of the ghouls around the dead man’s body because they won’t touch her. The Gamin will deposit the severed hand with the pendant into the basket of the flower girl.

In the shadowy street, The Gamin’s being trailed by the cop who has the same face as her father. In order to escape she goes into the apartment of the Evil One, which is a drug house, where jazz is being played by Shorty Rogers and the Giants, an interracial couple is hotly dancing, and the Evil One is kissing two pretty women who are at his table. The Gamin’s smiling father comes into the club and gets an envelope from the Evil One. The Rich Man reappears and the same beat cop from before is smiling at him, as The Rich Man looks through the basement window. Inside the apartment everyone is pointing at The Gamin including her father, who is also waving handcuffs in the air which he indicates are meant for her.

The Gamin once again sees herself drowning and the camera returns to a shot of her hotel room, as this nightmare ends. But the narrator poses the question, is it a dream of madness on a dark night — or was it real?

This is a bizarre film, a precursor to Welles’ “Touch of Evil” and Polansky’s “Repulsion.” If not made to be understood, it is at least a very demanding depiction of someone being demonically possessed by guilt. 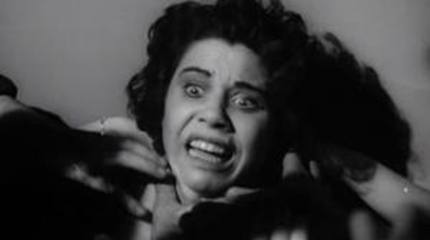