“An innocuous, unappealing and in the end an absurdly violent revenge gangster film.“

An innocuous, unappealing and in the end an absurdly violent revenge gangster film.

The unconvincing noir script by J.H. Wyman sinks to a level below the usual outrageous thriller. NYC crime boss Alphonse (Terrence Howard) goes bonkers after finding his gangster pal Paul strangled to death in a freezer, in a gangland style killing. Paul was tracking down the mystery person threatening the rattled drug king. To ease his mental pain, Alphonse and his boys mow down an apartment filled with Jamaican drug dealers. Alphonse’s gang features an assortment of international types, including some Albanian and Hungarian goons. The sullen and laconic Victor (Colin Farrell) is an Hungarian who joined the gang a year ago and is one of Alphonse’s loyal men assigned to track down his stalker. What Alphonse is unaware of, is that Victor infiltrated the gang to rub him out in revenge for destroying his happy family. A slow torturous death for Alphonse is what Victor has in mind for pay back.

While preoccupied with his scheme, Victor’s beautician French neighbor Beatrice (Noomi Rapace, Swedish actress), who lives with her dotty near-deaf mom (Isabelle Huppert, French actress), flirts with him from the terrace and they make a date. Beatrice’s face is disfigured from an auto accident and she wants revenge on the culprit who got off with only a slap on the wrist in court. She shows Victor a cell phone recording of him choking someone to death in front of her window, and snarls at him if doesn’t help her she will turn the video over to the police.

Credibility was not one of this film’s virtues. 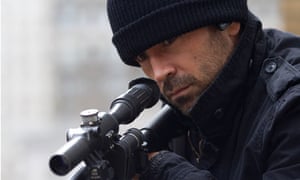