THE CRAWLING EYE (THE TROLLENBERG TERROR)

A “B” movie, based on a British TV serial called The Trollenberg Terror, that is not to be taken seriously. It provides enough unintentional funny material and hokum to possibly get a mute to laugh out loud. There are no pretenses, this is one of those bad movies that is enjoyable in a non-intellectual way. It features cheesy special effects. This stuff ain’t Spielberg, it ain’t even up to Robin Williams’ low standards.

At the remote Swiss Alpine village of Trollenberg, people are disappearing and one mountain climber is found with no head. The mystery of how these mountain climbers are killed off turns out to be that there is hidden in the radioactive clouds some one-eyed, tentacled, extra-terrestrials. Please refrain from yodeling any uncalled for responses upon learning that these outer space creatures have invaded Switzerland, having just come from the Andes. It seems that these non-moving clouds can only survive in the extreme cold and therefore choose mountain tops as their choice spots of habitation. Warning: watch out when these clouds move!

Allen Brooks (Tucker) is a U.N. scientist, who is as serious as a heart attack. He has an urgent message from his old scientific friend, the nutty Professor Crevett (Mitchell), to come at once to Trollenberg. Allen got his reputation burnt recently by reporting the possibility of extra-terrestrials in the Andes and could not offer any proof. Allen’ told by the professor that he suspects the many accidents occurring to climbers is due to that mysterious cloud, the same type of cloud that was in the Andes, which he is observing in his observatory towerthat is built like a fortress on the side of the mountain complete with steel-shuttered windows (the silly explanation given why it was built this way, is to deter avalanches). Allen must be thinking to himself, give me proof, man! Don’t leave me hanging again, what are the other scientists going think of me! Don’t tell me, professor, that you can’t report it to the authorities yourself because you’re a serious scientist, busy studying cosmic rays–because I’m serious, too! But, of course, Allen doesn’t say this to the professor; instead, he just says we must have more proof before we ask for help.

Anne (Munro) and Sarah Pilgrim (Jayne) are English sisters who developed a mind-reading act; they get off in Trollenberg instead of their Geneva destination when Sarah feels something pulling her to stay here that is stronger than her sister’s signal to move on. Sarah therefore joins Allen, who was on the same train and is staying at the Hotel Europa, where the genial but concerned innkeeper is Herr Klein (he’s losing business big time because of his guests’ vanishing). Also present is a British newspaper man, Philip (Payne), who smells a story here after seeing Allen unpack a pistol from his suitcase when arriving and soon recalls him from the alien story on the Andes. There are also a pair of climbers, Brett (Faulds) and Dewhurst (Saunders), who are not concerned about the accidents saying they are not superstitious, just give them a drink before they start the climb and they’ll be fine.

When the two climbers reach the mountain hut on their first day climb, they spend the night there. The telepathic Anne sees a vision of Brett disappearing, and when Allen calls Dewhurst in the hut, he confirms that Brett is mysteriously gone. When the search party reaches Dewhurst, they find him with his head torn off. Later, Brett returns to the inn, but it turns out he is a dead man sent by the aliens to kill Anne because she’s on their frequency. When Brett is cut after attacking Anne he doesn’t bleed, but he folds up like a cheap suit when Allen puts a few slugs in his belly. Brett was kept alive by being frozen and when killed again, he melts away to a skeleton.

Allen and the professor now feel confident that they are dealing with monsters and thereby gather everyone in the inn to go up to the observatory in the cable-car, where they will have a better chance of surviving. At last they come across the monsters and all I can say, it was smart of the filmmaker to wait till nearly the end of the film to see what they look like. Rather than being scary, the monsters look a lot like overweight Oprahs frowning at a guest’s politically incorrect responses.

Allen puts two and two together and decides since these creatures can only live in the extreme cold, he better fire-bomb them and get some airplane support from the British Royal Air Force to bomb them; and, before you can say Jackie Robinson, these monsters are out of there.

There are no surprises. You know what kind of film you are getting. “The Crawling Eye” may be a good film to see on late night cable TV while you are hoisting a few at the bar. In the film everyone either has a brandy or a Scotch to drink when shook up or about to climb the mountain, or just to be sociable. Therefore they might know something about this film that others don’t, that it might be best to have a few nips while viewing to enhance the quality of the film–not that I am an advocate of drinking, but what the hell…it can’t hurt in this case. Children wouldn’t need any artificial stimulants, the movie should be right on their level. I saw it sober, just for the record. So my grading of the film should be more favorably skewed for those who might be inclined to imbibe. 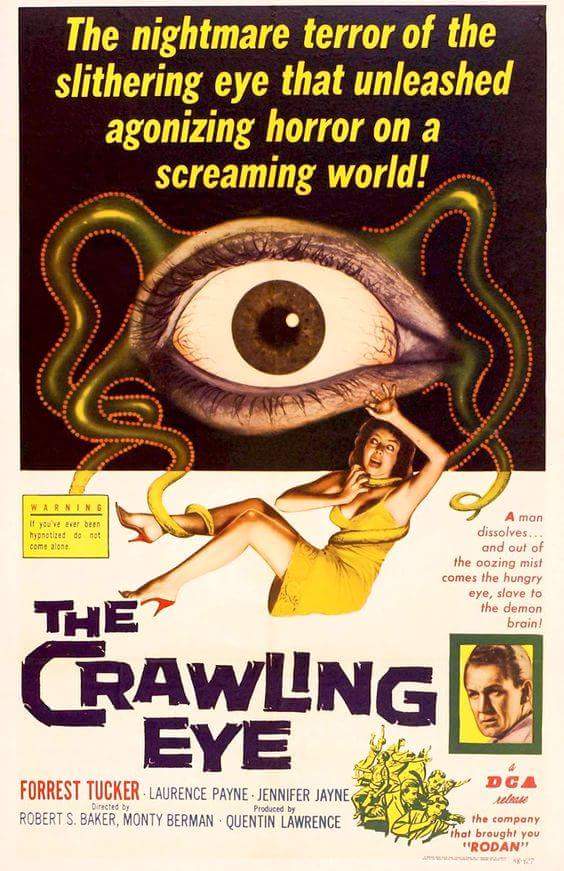