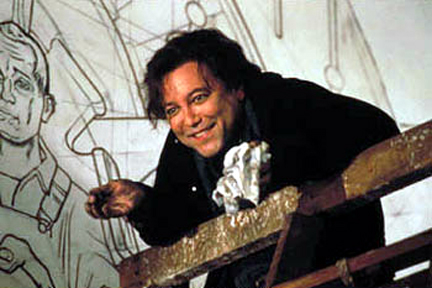 “The unfortunate thing about the film, is that it is not terribly entertaining.”

“Cradle” is a social conscience film about the creation of a leftist musical work in 1936, during the Great Depression, which was supported by President Roosevelt’s WPA (Work Projects Administration). It was written and directed by Tim Robbins and it centers on the first production of Marc Blitzstein’s musical play,”The Cradle Will Rock.”

It’s an ambitious effort about how one can preserve one’s dignity in the face of poverty. It also faces up to the dilemma of prostituting one’s art and soul in order to survive during the Depression. The picture tries to cover too much territory in this long epic-like period-piece production of over two hours, that often seems like a mess. The film has too many stories going all at once and too many characters coming in-and-out of it to follow them all, and the acting is less than compelling. As a result, it is easy to lose track of the real-life figures for the cardboard symbols they represent. The sides are drawn up — the good guys are the struggling actors and the bad guys the industrial magnates. But, fortunately, the film rises to the occasion in its uplifting finale, bringing a renewed energy for its clear-cut message to be credibly received at long last.

This is an old-fashioned liberal film, preaching its humanitarian message to the choir. A message of how the government must provide help to the unfortunate and how art has to be revolutionary to reflect the changes needed for the times, and how it is necessary to fight for one’s freedom or else it will be taken away. The unfortunate thing about the film, is that it is not terribly entertaining.

Blitzstein’s play about workers’ rights in Steeltown, U.S.A., was approved in 1937 by Hallie Flanagan, the head of the Federal Theater Project. Hallie put the production in the hands of the boy genius, the then 22-year-old irascible Orson Welles (Macfadyen). Orson became the director. The more restrained but more witty John Houseman (Elwes) became the producer. The two managed to get on despite their different personalities and artistic differences.

This is an almost true story (the dates certainly are out of order) as the troubled history of the Federal Theater Project is depicted, along with the telling of the Depression’s consequences on the working-class, the war fears associated with the rise of Fascism in Italy, the patronizing behavior of the wealthy industrialists toward the arts and the worker; and, the constant battle to keep the federally financed arts programs alive when Congress formed the House of Un-American Committee to root out communists and leftists in the theater.

The film lumbered through all its themes by showing snippets of the theater rehearsals, introducing and then forgetting a cast the size of an army. The main theater personalities presented are the fictionalized actors in the play: Olive Stanton (Watson), a homeless out of work actress who gets hired to be a stagehand and gets the lead singing part of the prostitute in the show. John Adair (Sheridan) is one of the actors who pushes her on-stage to get the part and he becomes her boyfriend. John Turturro plays Aldo Silvano with gusto, as an Italian actor proud of his family and someone who will not be compromised by living with his fascist relatives. Aldo chooses to get a less comfortable apartment than live with relatives who teach his children fascist songs. Bill Murray is the lonelyheart ventriloquist, Tommy Crickshaw, who doesn’t think Reds are funny and hates them because they are getting all the good jobs while he is being passed over and is forced to teach untalented actors. Joan Cusack is Hazel Huffman, a lonely woman who detests the Reds and is a priggish office bureaucrat, who works in the theater and becomes the key witness against her superiors. Hazel tells the committee how the Reds infiltrated the theater and about “mixed-race dating;” her testimony results in twenty percent of the actors losing their jobs. After Hazel’s testimony, she is ostracized by the other theater workers.

The real-life characters from the theater group hardly fare better when portrayed: The bland Marc Blitzstein (Hank Azaria) says he is not a Communist but a homosexual (The point is that homosexuals are viewed just as badly as are the Commies). Blitzstein is seen dreaming up his musical while trying to get it right about how a prostitute should be viewed. Blitzstein converses with the ghost of Bertolt Brecht. In actuality, Brecht did help him structure the play. Hallie Flanagan (Cherry Jones), head of the Federal Theater, is the fervent supporter for the theater’s many radical projects. They both gave adequate but forgettable performances.

There are intertwined stories about the industrialists mixing with the fascists. A Jewess fascist supporter from Italy, the former mistress of Mussolini’s, Margherita Sarfatti (Susan Sarandon), is a Hearst newspaper columnist. She is the attractive liaison between European Fascism and America’s wealthy industrialists — Sarfatti advises them on art and on getting Diego Rivera (Blades) to do the gigantic mural in Rockefeller Center for Nelson Rockefeller (John Cusack). Sarfatti also sets up the purchases of embargoed steel from the industrialist Gray Mathis (Philip Baker Hall) to help the Fascist war effort back home against the Communists while lining Gray’s pockets with money; and, Sarfatti also transfers smuggled works from old art masters, such as Da Vinci, for the industrialist’s private collection.

Nelson Rockefeller is seen as a young fool with lots of money, who wants to control the artists he hires. The most lively sketches in the film come about with his relationship with the wealthy, sexually promiscuous artist, Diego, whose work will be aborted by the industrialist after he sees the artist won’t cheer up the mural, won’t take Lenin off of it, and insists on having the rich capitalists being placed in purgatory. These scenes could have been even more potently dramatic, if the miscast Cusack was replaced by someone who could do a better Rockefeller.

At one point Nelson says, “I must confess that I’m more interested in the oil in paint than the oil in derricks.” William Randolph Hearst (Carpenter) secretly confides to a fellow magnate, Gray Mathis: “Killing strikers doesn’t play to the public. You’ve got to find a way to give them a dollar — and take two!” Vanessa Redgrave, in a stereotyped role, is Gray’s lightheaded, titled wife, Countess La Grange, with liberal aspirations and sympathy for the theater people. All these parts seem oversimplified, with the director pulling the strings as if the actors were puppets and though the message is “right on,” there was no immediacy or impact in the story. There was no art in the art, everything moved along predictably. I imagine that someone with much more political savvy and with more experience directing than Robbins, like Mike Leigh, could have found a way to get around this mess without altering where one’s sympathies should lie.

The government ended up cutting the funds for the theater project, which resulted in the theater group having to find another theater just before curtain time. The cast and the audience then trekked uptown through the streets and saw the show from the new theater. There was no scenery, there was just Blitzstein at the piano, and the play made history with a most thrilling and memorable opening. But, ultimately, politics aside, the trouble with the original play became what was the trouble with this movie version — the story and the music are just too dry, though the message it presents is worth savoring.

But any film that can quote Nelson Rockefeller on art and also leave no mistake where those other industrial patrons of the arts stood, makes me recommend this well-intentioned but flat dramatic film solely on that basis. Rocky and his friends state: “Artists are whores like the rest of us. We control the future of art because we pay for the future of art.” And Rocky goes on to say, after his disappointment with Diego, “That Abstract Expressionism is the future to come: Colors and form, not politics.” Ah! How diabolical are these quotations, showing the industrialists in their true colors and the contempt they had for the public and for art!

X FROM OUTER SPACE, THE

FAULT IN OUR STARS, THE