“This is a blood and guts art film with unforgettable intensity and stark scenes that few films have managed to capture with such fervor.”

Director Monte Hellman’s (“Two-Lane Blacktop”) Cockfighter is adapted from the novel by Charles Willeford, with the author also adapting the screenplay. It has the feel of the real thing, as it was shot on authentic Southern locations and explores with eyes wide open the lure of the subculture of the notorious but popular illegal sports business. Néstor Almendros does a beautiful job in filming, and the realistic flavor is further induced by the cockfighters being the real participants in the sport. Underneath that study the film bristles with a compelling psychological tale about repression, where competitiveness becomes a substitute for sex.

Warren Oates is Frank Mansfield the obsessive handler of prize cockfighters, who has taken on a vow of silence after once drunkenly talking too much during a fight and thereby losing. He intends to keep the vow until he redeems himself by winning the “Cockfighter of the Year” medal. He lost his last cockfight with his best bird to his arch rival Jack (Harry Dean Stanton), as in the wager Jack wins Frank’s truck, trailer, and girlfriend.

Oates attempts to get back together again with a former lover Mary Elizabeth (Patricia Pearcy) from his hometown, who has no interest in the sport and doesn’t want him to start over again. But he does start over thinking this is the only way of life he knows and the only way for him to find redemption, as he sells his house to buy more birds and forms a partnership with the financial backing of fellow cockfighter enthusiast Omar Baradansky (Richard B. Shull). His goal is to win the championship, and he thinks that will convince Mary to marry him.

This is a marvelous film that has slipped under the radar because it can be so upsetting in its bloody depictions of animal cruelty. Yet despite its bleakness, this is a brilliantly realized, gritty and uncompromising work. Oates’ portrayal of a self-imposed mute redneck existential hero is the best work he’s ever done in his long and distinguished career. He lives only for the competition and all other things in his life become secondary.

This is a blood and guts art film with unforgettable intensity and stark scenes that few films have managed to capture with such fervor. It’s an obscure film highly thought of as a cult favorite, but largely neglected by the public. 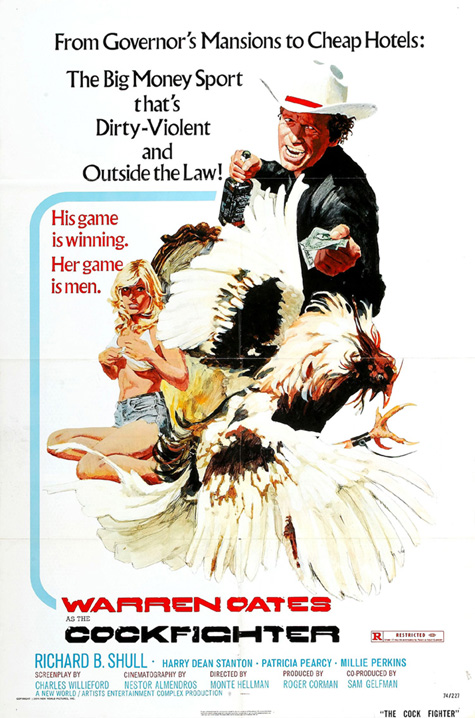