“A visual joyride, something that is terrifyingly pertinent in an eerie sort of way.”

There is something about this chic look at modern English society — one that is filled with wanton sex, drugs, and violence — that is more frightening than all the mayhem, perversity, muggings, and rapes it shows on the screen. I think that something has to do with the fear we have of trusting the young people depicted in the film with the future of the country. Kubrick, moralistically, seems to be pointing his finger at the pillars of the community and at the politicians who are clueless about what to do about the violence that is seen on an everyday basis in a society that appears to be a nihilistic one, where crimes are mainly committed by youths. He questions society’s responses to deterring crime: by their social reforms, their organized religions, their scientific experiments, their political meddling (from the Right and the Left), and by making prisons as the solution to all society’s problems.

That AClockwork Orange has stood the test of time and is as relevant seeing in 1999 as it was when it first came out, is a sign that society has not changed much since that time and that the film has opened up some skeletons in our closet about how we as a society still can’t face the severity of the problems manifested.

The film is shot in such pleasingly stylish colors, especially the orange background whereby the film gets its title. It is so visually splendid a film that it seems shameful that we are confronted with so much violence, as it seems that even the violence as presented and choreographed is all too entertaining for the vital message it is trying to deliver. One might expect a musical film to be taking place, if one were not aware that Kubrick was the director.

The droogs (McDowell, Clarke, Marcus, & Tarn) as they call themselves, are sitting in their favorite Korova milk bar hang-out, drinking their drug-spiked milk and surrounded by white-fiber glass nude furniture and statues of submissive women kneeling. They are wearing white trousers and white suspenders to match, with black combat boots and derbies, and have billy-clubs at their sides. Every night they commit stylized but meaningless acts of terrorism. Their feeling is that they can take whatever they want by force. Sex is the old in-and-out thing; if they want an auto they just steal it; and, if they don’t like someone, they just pummel them. These school-age kids do not necessarily come from bad homes–So, why are they so alienated from society, is the sixty-four dollar question!

In the first part of the film, we see a drunken bum (Paul Farrell) get beaten up for being a bum; a choreographed gang fight; a vicious rape (Adrienne Corri) and the paralyzing of the victim’s writer husband (Patrick Magee); the slaying with a giant phallus artifact of a wealthy elitist woman (Karlin) known as the Catlady, who runs a health farm; and lastly, the fighting for control of the gang among its four members.

The gang leader, Alex de Large (McDowell), lives at the graffiti-ridden Municipal Flatblock 18a Linear North with his trendy older mum (Sheila Raynor), who is sporting purple-dyed hair, and with his working-class “dadda” (Philip Stone). Both parents do not know how to get Alex properly motivated for school. The school adviser (Aubrey) is a too obvious homosexual, who can’t relate very well to the troubled Alex. Music, in the form of Ludwig Van Beethoven’s Ninth Symphony, arouses Alex’s love for sex and violence. It is his theme in life, the very joy of his existence, the inspiration for his perverse dreams. The other piece of music that plays a large role in Alex’s life is from ‘Singin’ In The Rain,’ which he triumphantly sings during the rape and is played as the credits roll down at the film’s conclusion when Alex is supposedly cured; that is, he is able to have his violent sexual fantasies again.

In this rather cynical and probing look at societal attitudes and what can only be termed as a dehumanized society that Kubrick sees all around him, the harshest comments are reserved for the scientific experiments conducted on Alex so that he will be conditioned out of his criminal impulses. These experiments were conducted where he is serving his fourteen-year prison sentence for the murder of the Catlady. He was imprisoned when his fellow droogs, Georgie (Marcus) and Dim (Clarke), upset with his bullying them around turn the tables on him during an escapade and conk him over the head with a milk bottle, enabling the police to get him.

The “experimental therapy” treatment Alex agrees to that gives the convicted killer a chance for an early release is backed by the new right-wing government in power, as the Machiavellian Minister of the Interior (Sharp) worms his way into the headlines hypocritically claiming that his administration will put a stop to the criminal by controlling his thoughts. When a bad thought comes up, the patient will experience a severe sick reaction which stops him from doing anything bad.

Alex re-enters society a so-called “changed” man with a physical aversion to the following: sex, Beethoven’s Ninth, and violence. There is a strong enough reaction to these things to induce a nausea in him. But he quickly learns that he cannot go back home, that he must pay for his bad deeds, and in his new journey he re-acquaints himself with that past. The same bum he once attacked now gets other bums to rough him up; the police who help him from this attack are his former cronies Dim and Georgie. They now take him out into the woods and work him over explaining his surprise at their current occupation, by telling him they are now of age to have such jobs. By mistake, he enters the house of the writer he once attacked, and will be used by that writer’s left-wing group for political revenge against the government they can’t stand. They get Alex to try and commit suicide to the constant playing of Beethoven’s Ninth. Alex survives his fall with broken bones and the renewed friendship with the minister, who descries that former treatment blaming the doctors who experimented on him for their foolish plan. Meanwhile he arrests the writer as a political subversive, and re-conditions Alex to be like before. He does all this so that his party can keep being in power.

Kubrick’s look at society is an unduly pessimistic one. There is something evil in society, but what to do about it, that is the question that remains. At least, for Kubrick, we better think about what we are doing to ourselves, before it is too late. The most frightening part of the film was that all the extremes of violence and cultural debasement, are pretty close to what the norms of society actually are.

I was left feeling unsure of how to take the film’s message. Was there a moral ambiguity exhibited toward the violence? Or, is Kubrick just being a moralist, pointing his finger at everybody? There just doesn’t seem to be much to think about as alternative ways to handle the problem youths. The film adaption from Anthony Burgess’ dystopian novel results in a pure Kubrick, over-indulgent, brilliantly visual and graphic film (the sets alone could tell the story). The jargon language used (called Nadsat-an onomatopoetic combination of English, Russian, and slang) made for a most arresting film, one that can’t be put aside without thinking about what kind of impact it makes on how we view such moral and ethical problems. But I just don’t think we come away knowing anything more about what to do about these problems than before seeing the film. Nevertheless, it was a visual joyride, something that is terrifyingly pertinent in an eerie sort of way; a memorable film, one that has become ingrained in our culture and must be looked upon as one of those ‘important’ films that one should see. I just didn’t think it reached the level of some of Kubrick’s other masterpieces (2001, Paths of Glory, The Killing, Eyes Wide Shut, and Dr.Strangelove) that, for me, were on more solid intellectual footing. 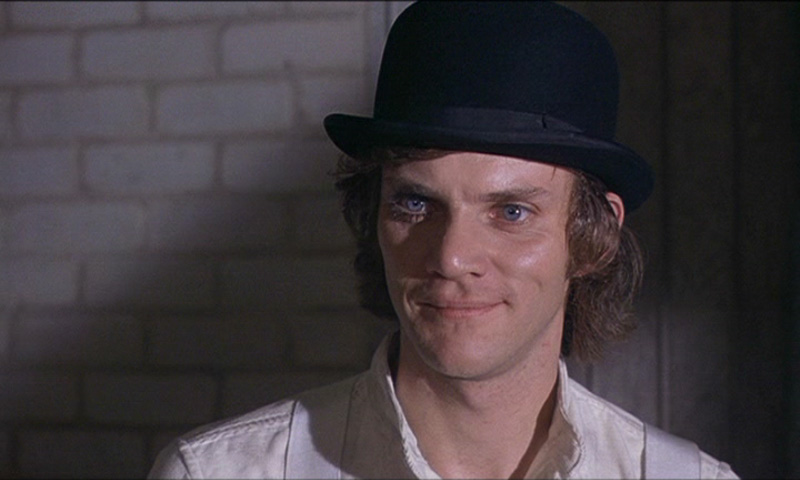