An engaging family drama religious film that explores the ideological differences between two teenage Jewish friends, one the son of a prominent Hassidic rabbi; the other the son of a prominent secular scholar, who is an orthodox Jewish Zionist. Director Jeremy Paul Kagan (“The Big Fix”/”By the Sword”/”Heroes”) and writer Edwin Gordon base it on the 1967 best-selling novel by Chaim Potok.It’s a moving, well-acted and well-told offering on being Jewish in modern times and of the importance for Jews of Israel becoming a recognized country, but at times it was tedious and lacked dramatic moments.It’s set in Brooklyn during the latter days of WW II and during the post-war period in the late 1940s.

In 1941, in Brooklyn, teenagers Reuven Malter (Barry Miller) and Danny Saunders (Robby Benson) are on opposite teams in a schoolyard softball game. During the heat of battle, Danny hits a hard line drive to the pitcher that shatter Reuven’s glasses and result in an eye operation to save his eye-sight. After a frosty start to their relationship, the two scholarly boys begin a heartfelt friendship despite their different upbringing. Reuven’s father (Maximilian Schell) is a professor, who is a Zionist and encourages his son’s cultured worldly thoughts. Danny’s father is the Hassidic Rebbe Saunders (Rod Steiger), who raises his son in silence to teach him humility and expects him to follow the families long tradition of being rabbis.

In 1948, when the UN approved Israel as a secular Jewish state, Professor Malter was overjoyed but Reb Saunders was against it, believing only the Messiah should lead the Jews back to the homeland. This friction causes Reb Saunders to prohibit the friendship of the boys, which lasted until Israel was accepted as a country.

The sentimental film is at its best depicting the Hassidic rituals and the joy they get from their observances, that leads them to dance and song. For the Hassidic, being a good Jew depends more on how you feel than in how much you know. Overall the film accomplishes what it sets out to do and effectively gives us some insight into the finer points of the religion. It gets good performances by Robby Benson and Rod Steiger. 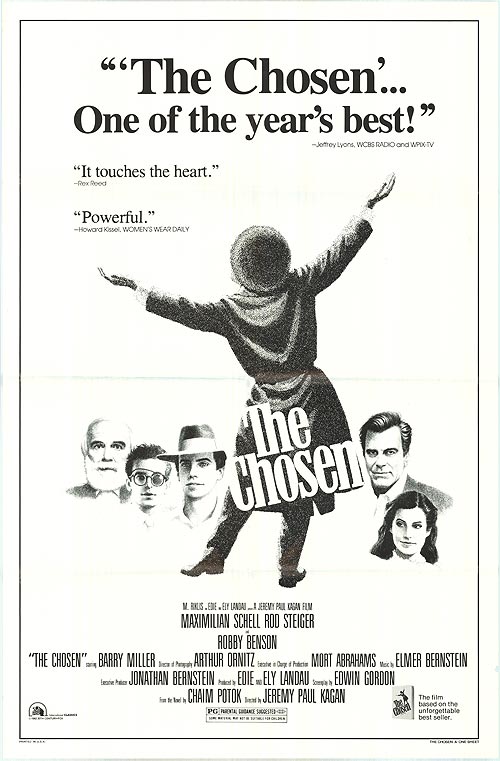 PRECIOUS: BASED ON THE NOVEL BY SAPPHIRE

ORPHANS OF THE STORM