“This is not one of Aldrich’s better films.”

Robert Aldrich (All the Marbles”/”Attack!”/”Twilight’s Last Gleaming”) helms an intended black comedy on the horrors of modern urban life and the vulgarization of American society. Writer Christopher Knopf loosely bases it on former policeman Joseph Wambaugh’s bestselling humorous novel that explores a group of eccentric, sexist, bigoted and cynical L.A. policemen. Unfortunately the ribald humor and the far-reaching truth about an urban cop’s life uncovered in the book never comes across in the episodic film as intended–it lacks conviction in uncovering the truths about the police and the humor becomes gratingly crude and offensive in a stereotyped sense. This is not one of Aldrich’s better films. It’s a mess and not a very likable film, but it still left me wondering that if it were better executed it might not be that far off the mark in its depiction of the moral decline in American society and its institutions after the debacle in Vietnam. The film treats everything as vacuously sitcom funny and never lays a finger on the intensity Wambaugh’s novel placed on both the on-duty work and off-duty play of the cops featured. Wambaugh supposedly worked on the screenplay, but was uncredited (though he has claimed that he now wants nothing to do with the film and even sued over the adaptation).

The film’s title is derived from the impromptu off-duty, late-night, booze and babe parties that the cops in the Fairfax precinct house hold. One such wild blow-out was in L.A.’s MacArthur Park. The sessions are comically called choir practice, where the cops unbend from their hazardous duty by singing, fighting, screwing and playing wicked frat-boy practical jokes on one another. The film’s major incident centers around the wrongful shooting by a mentally disturbed cop, still suffering from his combat experience in Vietnam, of a homosexual teen cruising the park and the incident being covered-up.

Of the many colorful cop characters the film centers around, the star is the veteran fatherly-figure cop played by Charles Durning. He’s set to retire in six months but because he’s a wise guy and questions the way things are run in the precinct, he has made enemies with the brass and they are out to nail him so he doesn’t get his pension. Perry King plays Durning’s all-American partner, who turns out to be not all that he’s cracked up to be and is into dangerous S & M practices with his stripper girlfriend Foxy; Tim McIntire plays the villainous red-neck bigot; Randy Quaid is “the kid” learning the ropes and Burt Young is the scruffy sergeant on the vice-squad who is mistaken by the cops for the station-house janitor. 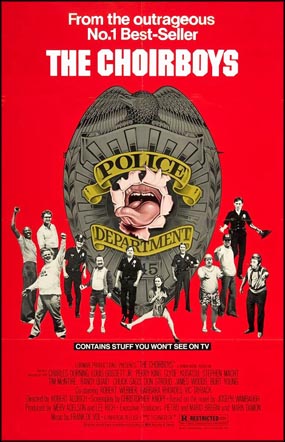