“Chalk’s aim is to clue you in why 50% of teachers quit within the first three years.”

A labored mockumentary, that looks depressingly real, about teachers that’s shot in the improv style of The Office and Best in Show, but lacks the same rich humor and free spirit of the latter. Chalk’s aim is to clue you in why 50% of teachers quit within the first three years. It’s set at the fictional Harrison High, a diverse public school located in “Anytown, USA.” It’s Mike Akel’s directorial debut, and he cowrites it with Chris Mass. Both writer and director were former teachers together in Austin, Texas, and they certainly have their subject-matter down pat but don’t do as much with this opportunity as they could have. It’s interesting to note that the cast of high school kids is made up of Mass and Akel’s former students, who filmed it over their summer vacation.

In way that should make one squirm in their seat, “Chalk” follows three flawed teachers and one flawed administrator over nine months. The teachers are the nervous and uptight divorced novice history teacher Mr. Lowrey (Troy Schremmer), the pushy but passionate P.E. teacher, Coach Webb (Janelle Schremmer), and the third-year social studies teacher, Mr. Stroope (Chris Mass), who comes off as both an odious authority figure but someone who is cunning enough to know how to be friends with the students and kiss up to the administrators. Mrs. Reddell (Shannon Haragan) is the newly appointed unsure of herself Assistant Principal, who last year was the competent music teacher and finds that she’s not enjoying her new position because she’s not suited for it and is overworked. Reddell is best friends with the single Coach Webb, who seems to take satisfaction she knows one of the powers in the school. The coach who has short-cropped hair and is gung-ho over exercise, feels she has to tell us she’s not gay since the public perceives that gym teachers who look like her must be gay. She arrogantly feels she has her job down pat, and only frets about her personal life without a man and that school discipline should be rigid while she doesn’t want to be perceived by the staff as too bossy.

The film’s main worth is that it gleefully, as presented with all due malice from those who know, puts pin pricks in Hollywood’s bubble of inspirational teacher pics from the Blackboard Jungle to the more contemporary The Emperor’s Club. For that alone I’m grateful, even if too many scenes weren’t developed enough and opted instead for easy pot shots at uninspired students, overbearing parents and stressed-out teachers. Showing teachers with inferiority complexes, bowled over by the school’s use of bureaucratic discipline, counting the days until summer vacation, humiliated when losing control of the class, and awkwardly confused over basic classroom management techniques, is only the tip of the iceberg in looking at the teaching profession and understanding how important a job it is, how low paying a job it is and how trying a job it is—and how important it is for the country to upgrade its schools to compete in the world market. We are left with the message that improving educational standards must begin with getting capable teachers and keeping them. 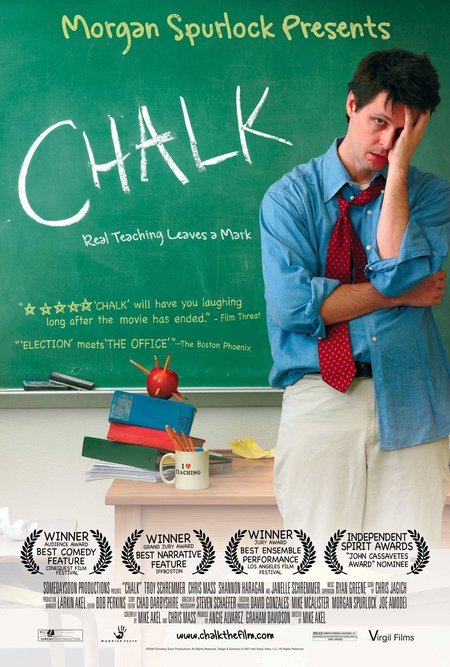