This is the final installment of playwright Marcel Pagnol’s (“Topaze”/”Letters From My Windmill”/”The Baker’s Wife”) heart-warming Marseille trilogy, which offers colorful fictionalized portraits of life in the seaport city. It’s the only film in the trilogy directed by Pagnol, as the 1931 Marius was directed by Alexander Korda and the 1932 Fanny by Marc Allégret. Because the playwright directs, the overlong film loses much of its cinematic pep and is much too predictable but, nevertheless, is still winsome as it retains its same wit and humanity. This is the first version where Pagnol wrote the screenplay first and the play followed afterwards.

It’s set in Marseilles, some 20 years after “Fanny.” The 70-year-old Honore Panisse (Fernand Charpin) is dying and his elderly friend César (Raimu), a bar owner, gets the priest (Thommeray) to visit his deathbed for the last rites and confession. The much older Panisse married Fanny (Orane Demazis), the daughter of a fishmonger on the Marseille waterfront, and secretly adopted her love child, Cesariot (Andre Fouche). César is the godfather to the now grownup Cesariot. Fanny only married Panisse after she had been abandoned by Marius (Pierre Fresnay). He ran off to be in the merchant navy. Panisse dies after confessing in front of his male friends that Cesariot’s real father is Marius, whose father is César. Fanny is left with the duty to tell Cesariot the truth, something he was not told before. Cesariot says he’ll visit a friend and instead goes to Toulon, where César told him Marius is a mechanic. The son poses as a journalist and after spending some time with his unsuspecting dad, believes he’s a petty thief. Eventually the small white lies catch up with Marius, Fanny, César, and Cesariot, and they must deal with reality. The grandfatherly César does his best to bring Fanny and his son together again.

It’s easy to be charmed by this black and white shot melodrama, that covers the universal themes of family togetherness and love. The acting honors go to Raimu, who steals every scene he’s in. Italian directors Roberto Rossellini and Vittorio de Sica have said Pagnol was the father of neorealism. This film is evidence that Pagnol liked to keep things real. 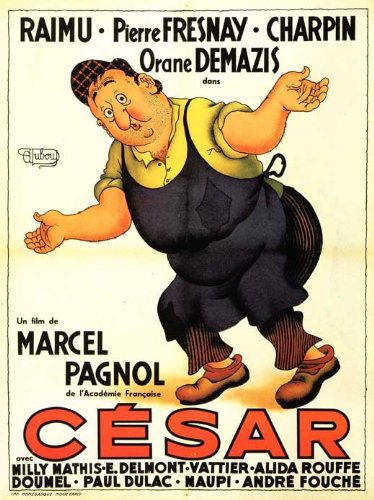