“Depressing documentary about a rush to judgment over one of NYC’s most notorious and heinous crimes.”

The depressing documentary about a rush to judgment over one of NYC’s most notorious and heinous crimes, at a time in the 1980s under Mayor Koch when there was a crime wave and racial tensions were at a breaking point, aims to set the record straight about that unforgettable gut-checking incident.

It’s competently directed, written and produced by Ken Burns, his daughter Sarah and her husband David McMahon, with an added agenda to show that the police investigation was inadequate. Ms. Burns’ 2011 book “The Central Park Five” states that the five teenagers had been in the park that night, with a gang of about 30 kids who violently attacked a number of people that night. They revisit, in all the ugly details, the tragic events that occurred on the night of April 19, 1989 when a white female jogger was found in the underbrush of Central Park clad only in a bra, nearly beaten to death, sexually assaulted, and her skull cracked. Later the jogger is identified as Trisha Meili, a 28-year-old investment banker, who when she miraculously comes out of her coma has no memory of the incident. What’s clear on this same night, the park had a number of incidents of “wilding”–wolf-packs attacking citizens at random. As a result five teens were picked up in the park for wilding and brought to the police station for questioning, and would be eventually accused of the crime.

Through interviews with the five Harlem black and Hispanic teens, all between 14 and 16, and the use of montages, we look back at how the police through a rough pressured interrogation get confessions and that results in the innocent teens (innocent of the vicious rape, but probably guilty of violently harassing others in the park) being charged with the crime and when some are tried a year later and others in a second trial, all get convicted despite no proof of their DNA at the crime scene or other facts to corroborate their participation in the crime. The press never questioned the discrepancies in the police story and the enraged public was filled with shock, hatred and fear, and would have lynched the demonized five if it were back in the day. The convicted teens served out their sentences of six to thirteen years, and the last felon is released in 2002. While they were in prison Matias Reyes, a psychopathic violent career criminal imprisoned with them in the Auburn Prison, known as the East Side rapist, confessed to other prisoners that he was the guilty party who committed the Central Park rape. When Reyes is investigated, the police gather new evidence about the crime that only the culprit who committed the crime would know and discover his DNA is a match. The judges, under DA Morgenthau’s consent, drop all the charges against the boys.

The Central Park Five lacks drama and is such a gloomy subject that it’s difficult to watch because it brings back so many bad memories, nevertheless the story still has power and relevancy because of the brutality of the crime and that it had such an adverse effect on the city by depicting that the system failed to work when the press, judicial system and police didn’t do their job. Even today the police and justice department won’t apologize for railroading the teens and the press will not admit to its mistake of taking what the police presented at face value without asking questions.

The Central Park Five have a civil law suit filed against the city, that still hasn’t been resolved.There’s still a bitterness over the case because it suggests racism, among other things about a city that seemed uncivilized. The victim as well as the city and the teens were left with permanent scars that can’t be resolved by a mere film at this late date. 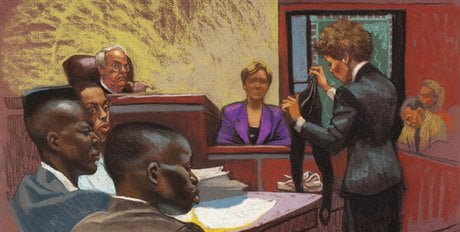 FALCON IN SAN FRANCISCO, THE