“An inane thriller for those with a penchant for films that nuke themselves.“

An inane thriller for those with a penchant for films that nuke themselves on purpose.

Hong Kong director John Woo (“Hard Target”/”Face/Off”) piles on a number of ridiculous action sequences and writer Graham Yost can’t do better than writing an empty screenplay, that at least moves along with speed.

The entertainment comes from watching John Travolta’s hammy performance as the bad dude, which was so bad it might have been good, and catching the legendary Raider football player, Howie Long, trying to tackle his cliched role as Travolta’s loyal henchman. Bitter after passed over for promotion as an Air Force pilot, Major Deakins (John Travolta), during a training exercise over the sand dunes in Utah, fakes his death in a crash of his Stealth bomber and makes it seem as if Captain Hale (Christian Slater) was responsible for the crash. But Hale parachutes to safety and is found alive in the desert by National Park Ranger Terry Carmichael (Samantha Mathis), who partners with him to retrieve the missing 2 nukes that was stolen by Deakin’s gang. Deakin’s plans to sell the nukes to the American government and live like a king in Sweden. The scheme is sponsored by a venal businessman (Bob Gunton) and aided by former military men looking to get rich from the scheme.

It’s most goofy line has Slater say: “You’re out of your mind.” and Travolta responds with: “Ain’t that cool.” 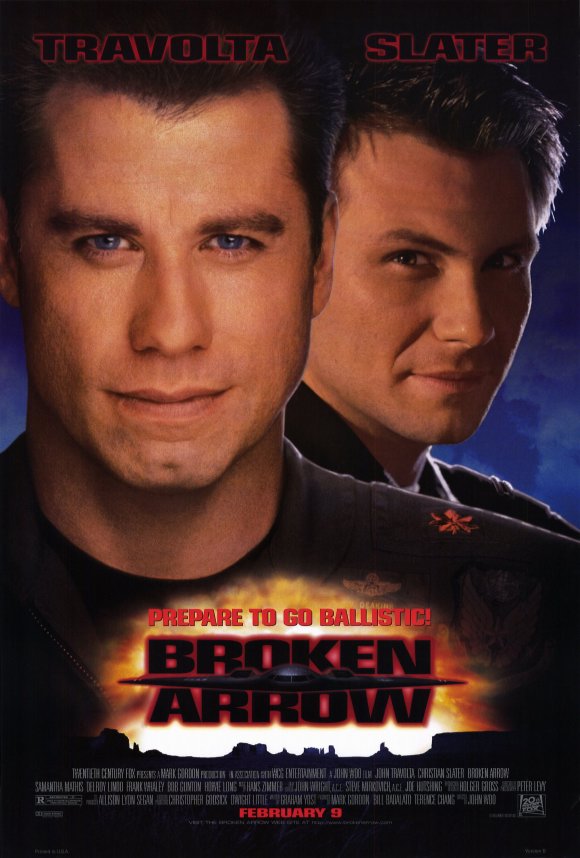