“The wit never comes through the art deco settings.”

British writer/actor Stephen Fry makes his feature-film debut with this sophisticated period comedy adapted from Evelyn Waugh’s moralistic and very amusing 1930 novel Vile Bodies. It’s set in London during the Jazz Age of the ’30s, as it follows the posh hedonistic high society party animals who aimlessly live for fashion, gossip, drugs, sex and the next party. This kind of material should be right up Fry’s alley, but he keeps it terribly droll and leaden–the wit never comes through the art deco settings. The result is a bloody awful narrative about superficial characters not worth caring about.

A marvelous rave in the opening scene sets the stage for what Fry was trying to accomplish: linking the past revelers with today’s. The tale centers on aspiring writer Adam Symes (Stephen Campbell Moore, stage actor), who has returned from France after writing his great novel Bright Young Things about the dissolute youth of his era but finds the book has been confiscated by prudish British customs authorities. Adam’s publisher, the full of himself Canadian newspaper magnate Lord Monomark (Dan Aykroyd), who commissioned the novel, demands that the advance be returned and refuses to pay for the novel unless the young lad rewrites it. The writer is the least flighty of his idle peers as he at least is serious about doing something, which sets him apart from the others. But he’s left with no money as his dream of living off his writing success has been put aside temporarily, and he now desperately tries to tackle his other major problem–to get enough bread together to marry his rich and beautiful bored flapper sweetie pie Nina Blount (Emily Mortimer). She breaks off any marriage plans unless he comes up with some adequate coin for her to live rich. Adam risks his last £1,000 on a horse tip given to him by a drunken major (Jim Broadbent) he meets in a dive boarding house and when that fails the lad tries to get a loan from Nina’s reclusive, eccentric father (Peter O’Toole), who gives him a check signed Charlie Chaplin.

The centerpiece scene is a glittering ball thrown by an empty-headed cocaine sniffing society woman, who as amusement for her fast crowd has the American evangelist Mrs. Melrose Ape (Stockard Channing) preach while her angel chorus sings spirituals. Ape goes ape when she observes the debauchery taking place right in front of her and gives a ‘hell and fire’ sermon on sin. There’s a shot of an elderly distinguished party goer (Sir John Mills) snorting cocaine through a straw and of Lord Simon Balcairn (James McAvoy), who has betrayed his own kind by becoming the gossip columnist Mr. Chatterbox for Lord Monomark’s Daily-Express, sneaking in with a bearded disguise to write a snippy piece about the affair. The insecure lad gets detected by the party guests and fired by the paper, and chooses suicide. The paper then secretly hires Adam to be the new gossip columnist, promising to promote his novel if it’s ever recovered from customs. He’s helped with the column by Nina, who makes up stories for him that are filled with wild and obsessive behavior of the society celebs and report on new trends such as society folks starting to wear green derbys.

Adam’s absurd childhood friend Ginger (David Tennant), who is now extremely wealthy, becomes engaged to Nina. Then World War II takes place and the grim events change things for everybody. Adam will return from the war prepared to accept being middle-class and working for a living, as the film ends on a so-called happy note.

Other members of the party set of note include the wacky Agatha (Fenella Woolgar), choosing to dress mannish in Dietrich-esque pantsuits; the flamboyant Miles (Michael Sheen) and Richard E. Grant popping up in clerical drag as the prissy Father Rothschild.

Though capturing the look and vacuous characters of the period, the film sweats too hard to try and be sophisticated funny and its more serious scenes are too flat to have conviction. Too many of the characters were just plain drags, as their antics seemed innocuous and hardly worth the fuss that filmmaker gave to such an unappealing group. This is clearly a case of the book being much better than the movie. 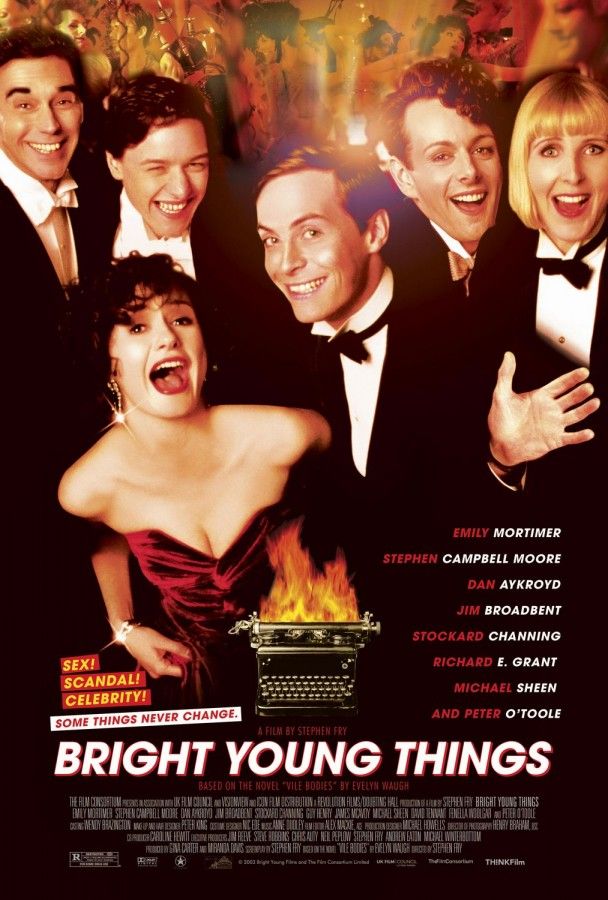 MAN THEY COULD NOT HANG, THE