“One should take heart that there are no talking head interviews as there usually are in such documentaries.”

Breakfast With Hunter is an intimate documentary by Wayne Ewing (known for TV documentaries and the Homicide & Crime and Punishment serials) that chronicles a few rebellious incidents in the political doings of notorious gonzo journalist Dr. Hunter S. Thompson’s personal life and his struggles to bring his celebrated 1971 book “Fear and Loathing in Las Vegas” to fruition as a feature film in the way the author feels will do his labors justice. This cinema vérité film was shot in digital and spans many years on the trail of the cultural icon. Since I have always been amused by Hunter’s anti-social antics and irreverence, I found myself cheering for the film to work. I liked it for its lack of pretentiousness and for a chance to watch the rogue Aspen resident do his outrageous thing uninhibited, nevertheless I would have liked to have seen a more edgy film. The film should be of interest to those already in the fold, but I doubt if there’s a wider audience available. But then again, I can’t say that with certainty. Who knows, this ‘love letter to Hunter’ might spark an interest in those who are unfamiliar with him and who might be impressed with his direct way of speaking and find him worthy of celebratory status as the “Champion of Fun.” Maybe this video will get new fans to check out Hunter’s long list of books that have revolutionized the journalism field since the 1960s, from his classic on the Hell’s Angels to The Rum Diaries to On The Campaign Trail–his book covering the 1972 George McGovern campaign for president.

The documentary mainly covers Hunter’s collaboration on the film in 1996-97, as he’s shown artistically disagreeing with the original director/co-writer Alex Cox of “Fear and Loathing in Las Vegas” who wanted to put cartoon animation into the film. Cox was replaced after this volatile meeting with director Terry Gilliam. There are also varied shots with actors Benicio del Toro and Johnny Depp bonding with Hunter on the set of filming the movie they star in, with Depp playing Hunter. When not covering the making of the film, there are flashbacks to an earlier time when Hunter ran as a pot smoking “Freak Power” candidate for sheriff of Aspen–an election he narrowly lost to the more traditional candidate. Some of the home movie footage goes back as far as 30 years. The flashbacks include shots of Hunter relaxing in his residence in Owl Farm, many of him boozing it up with friends, and of his childishly playful visit (in the form of a fire extinguisher raid) to the posh but plastic Manhattan headquarters of the Rolling Stone magazine and their publisher Jann Wenner–his former publisher.

Ewing, a friend and neighbor of Thompson’s for many years, has shot a benign homage to the writer he obviously greatly admires. But there are enough zany moments that should please the author’s devout fan base, and one should take heart that there are no talking head interviews as there usually are in such documentaries. Adding immeasurable value to the film are the glimpses into Hunter’s private life that another filmmaker without such access might never have gotten. 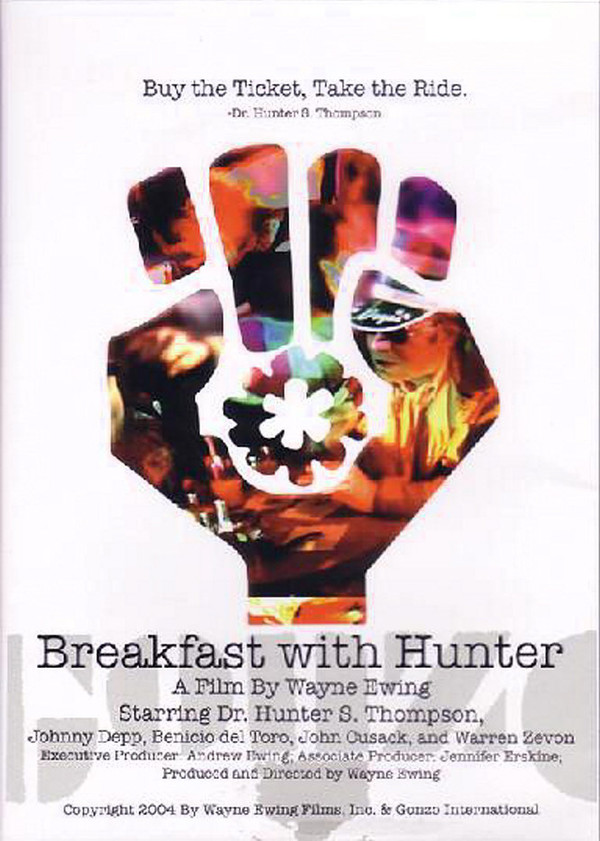