“Pathetic comedy on the sexual mores of the American suburban male in the early 1960s.”

Pathetic comedy on the sexual mores of the American suburban male in the early 1960s. It’s directed by a blacklisted filmmaker of the 1950s, Michael Gordon (“Pillow Talk”/”Texas Across the River”), who limply directs as if it were TV sitcom fodder. Writers include Ira Wallach and Marion Hargrove, who base it on a story by Arne Sultan & Marvin Worth. Manhattan commuters from Greenwich, Connecticut are the bachelor Fred Williams (James Garner) and three married friends, Doug (Howard Duff), George (Tony Randall and Howard (Howard Morris. The horny executives share a luxury swinger’s apartment and hire through an ad in the NY Times an attractive blonde, Cathy (Kim Novack), as housekeeper. The married boys each pick out a different night to stay in town to see Cathy. They tell their wives they signed up for an evening college course. All the boys romantically pursue Cathy, but what they don’t know is that she’s using them to write a doctoral thesis on their behavior. Cathy is being supervised by Professor Prokosch (Oscar Oscar Homolka). Fred, the one eligible guy to woo Cathy, gets into a jealous snit when the guys boast of their prowess with Cathy and out of desperation proposes to her. The film has aged poorly, the comedy is flat and nothing saucy ever occurs. It’s a witless film. 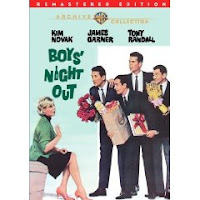