British born director Roy William Neill (“Dressed to Kill”/”The Black Angel”/”Sherlock Holmes Faces Death”) directs this low-budget, eerie, atmospheric, hokey B-film Gothic melodrama, that has Boris Karloff in a dual role as the good twin Anton and the evil twin Gregor. It’s based on a story by Arthur Strawn and written by Strawn and Henry Myers. The film is set in some 19th century unnamed Eastern European country.

A legendary family curse has the Baron de Berghman (Henry Kolker) curse the day his wife gives birth to twins, as prophecy has it that the family heritage started with the birth of twins–where the younger one murdered the older one in the castle’s Black Room to begin the family line and fratricide will also end the family line in the same way. It seems the younger one was peeved he got zilch while the slightly older one inherited the baron’s title and estate. With the birth of twins, the father realizes that it’s fated it will all end as it began for his aristocratic family and that the younger twin Anton, born with a paralyzed right arm, will kill his older brother Gregor in the castle’s Black Room. To thwart the family curse, the Black Room is sealed shut.

With the parents dead, the film picks up some twenty years later when Gregor has turned into a brutal monster who is hated by the villagers for his despotic rule as a baron and to boot is a serial killer of their women. They try unsuccessfully to assassinate him. Gregor thereby pleads with his good-natured younger brother to return from his self-exile in Budapest to live with him in the castle, after Anton has been gone for ten years. Things get hectic around the castle when the demented Gregor kills the servant girl Mashka (Katherine DeMille), his secret lover, because she’s learned that he goes to the forbidden Black Room through a secret door in the fireplace. With that, the angry peasant villagers storm the castle. To appease the mob, the cunning Gregor renounces his title and estate to his recently arrived sensitive younger brother and promises to leave the country in a few days after taking care of business. But Gregor lures Anton into the Black Room, that holds a torture chamber, and dumps his body into a pit where he dumps all his victim’s bodies. Gregor then assumes the identity of Anton. Col. Hassel (Thurston Hall) is the uncle of the beautiful Thea (Marian Marsh), someone Gregor has his sights set on to marry only she despises him and is love with the earnest Lt. Albert Lussan (Robert Allen). Uncle won’t approve of Gregor but really likes Anton and his new title, and when he proposes the uncle accepts for Thea–never mind that she’s in love with someone else. When the Colonel catches on that Gregor is impersonating his brother, he’s slain in his study. Unfortunately Albert was in the Colonel’s house at the time making threats about anyone else but him marrying Thea and gets wrongfully convicted of the slaying. With the marriage of Thea to the baron about to take place, we only have to wait to see the novel way the family curse is fulfilled with the help of the baron’s mastiff.

Fans of Boris Karloff will be pleased with his capable performance that comes without the use of monster makeup. Why it’s called by some a horror story, is probably because the best known player in horror films himself is the star and it might be difficult for some to think of Karloff in a film that wasn’t a horror film. 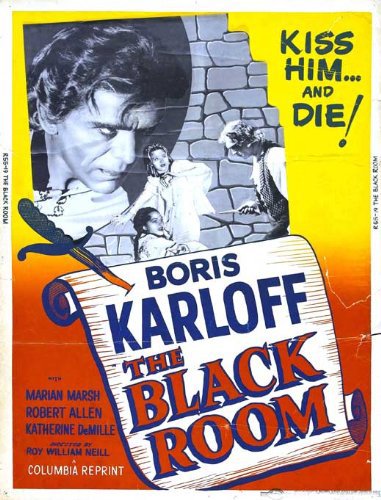