“It might be the most beautiful film ever done in Technicolor.”

The team of Michael Powell and Emeric Pressburger (“The Red Shoes”/”Stairway to Heaven”/” I Know Where I’m Going!”) create a masterpiece in their intelligent spiritual melodrama about nuns in India. It’s based on the novel by Rumer Godden, who also wrote the book Renoir’s The River was based on. That film was shot on location in India, Black Narcissus is shot entirely in the Pinewood studio. Thereby India becomes an imagined state of mind instead of a real place. It might be the most beautiful film ever done in Technicolor; it would be hard to name a film that tops it. It’s also a very well-acted film, especially by a young Deborah Kerr who was soon afterwards to emerge as a big star.

Sister Clodagh (Deborah Kerr) is teaching in Calcutta for her Anglo-Catholic “Order of the Servants of Mary.” She’s told by her Mother Superior that she’s to be the Sister Superior, one of the youngest ever chosen, in the isolated Himalayan region of Mopu. There she will convert a donated sultan’s palace (previously used to house his father’s concubines) into a convent offering a school and a hospital. Her staff includes the following Anglican sisters: the gardener Phillippa (Flora Robson), the strong-willed medically experienced Briony (Judith Furse), the popular Honey (Jenny Laird), and the mentally unstable Ruth (Kathleen Byron).

On her arrival Sister Clodagh meets the Old General (Esmond Knight) who bestowed the gift to the Order. He sees the need for the peasants to be schooled and served by a hospital, and in order to get the peasants to attend he pays them until they get into the habit of attending. The agent for the General is the cynical and agnostic Brit Mr. Dean (David Farrar), who has been instructed to help convert it into a nunnery. Angu Ayah (May Hallatt) is the resilient caretaker who preferred her former guests, the concubines, because they were more fun. A child of about 10, Joseph Anthony (Eddie Whaley Jr.), acts as interpreter because he speaks both English and Hindu.

The Order is built on hard work, but soon the nuns experience conflicts over the climate, the rarefied air (the palace’s elevation is 9,000 ft.), health issues, morale, past memories become haunting, Mr. Dean’s sexy presence becomes a distraction as he cavorts about in shorts exposing his naked thighs, temptations induced by the beautiful surroundings, the General’s son (Sabu) who wears a cheap men’s cologne called Black Narcissus he purchased in London’s Army and Navy stores, and the sexually repressed Sister Ruth going stark raving mad. The nuns can’t handle this sensual environment, it’s so removed from their orderly chapel life as they all experience fears and doubts about why they chose their vocation–something they can overcome in their more familiar setting.

Jean Simmon plays Kanchi, a young native girl who is unruly and in heat. The General requests the nuns try to rehabilitate her, instead she becomes the concubine of the General’s son. 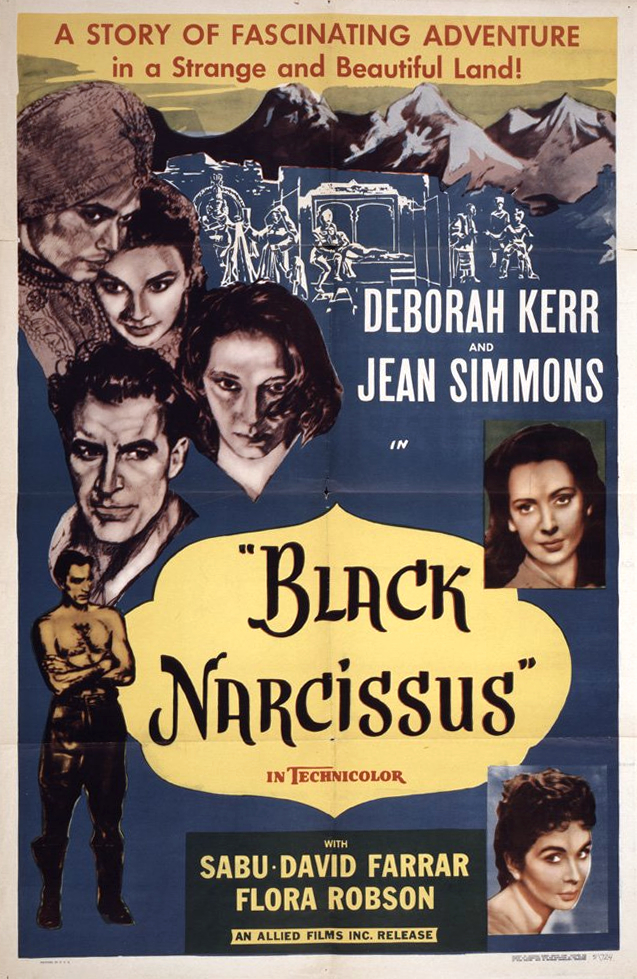