“It’s a stunning lyrical work of considerable force and truth.”

The 20-year-old Samira Makhmalbaf’s second feature after her winning debut directing The Apple when she was a mere 17-year-old, is a more ambitious but ultimately a largely inaccessible work. It won the grand jury prize at the 2000 Cannes International Film Festival. Her noted director father Mohsen Makhmalbaf also cowrote the screenplay and did the editing, as he did before. Blackboards is a puzzling fable set in the remote mountainous area of Kurdistan on the northern Iran side of the border with Iraq. The characters are all Kurds. The aims are metaphorical, revolving around evocative images taken from ambiguous set-pieces. Blackboards traverses the strangely barren countryside and introduces the viewer to travelers who are not enfranchised in their own countries. The desolate atmosphere is much the same as the one Mohsen provided in his politically stimulating Kandahar. Though not all of this film might be discernible to a Westerner, the political cry for humanity and education and government responsibility to help a starving people comes across very clearly.

The film opens as a group of seven itinerant male teachers with blackboards on their backs are walking in the wild border area hunting for pupils to teach how to read and write and do simple math (It must be a Kurdish thing, because it certainly seemed like a weird way to get pupils). When an army helicopter hovers above, the teachers use their blackboards to take cover. Two of the teachers break from the group and then each splits to follow their own path.

One teacher named Reeboir (Bahman Ghobadi, director of A Time for Drunken Horses) attaches himself to a group of adolescent boys carrying contraband from Iraq. They are called mules, and the daily dangers they face as smugglers are from land mines, the border police, the rough terrain and the heavy loads on their backs. The children are only concerned with survival and could care less about education. They at first say they are illiterate but later admit that some can read, as they lied because their mothers told them to never trust strangers. One boy with the same name as the teacher is interested in learning how to write his name, and gives the teacher a scrap of food for the lesson as the learning is on the run. When one of the boys, a storyteller, falls during a rock slide, Reeboir chops up his blackboard so it can be used as a splint.

The other teacher, Saïd (Saeed Mohamadi), after having no success getting students in a village stumbles upon a party of 100 or so lost Iraqi Kurdish nomads, who are almost without food and are desperate to get back to their homeland. They are also not interested in a teacher, but hire him as a guide for 40 walnuts if he gets them to the border. An old man is so sick he can’t piss and has to be transported on the blackboard. He struggles on because he’s afraid his young widowed daughter Halaleh (Behnaz Jafari, the only professional actor in the film), who has a young boy, will not remarry. She’s the sole woman on this journey. Saïd agrees to marry her to please her father, and the tribal elder performs the marriage on the spot. The teacher is made to promise that he will not let her starve. When the border patrol fires at the group, Halaleh thinks it’s a chemical attack like the one she lived through in Halabcheh, Iraq (the town over the border where there was a chemical attack on the Kurds). The journey is further marred because the group does not trust outsiders and are fearful the teacher will lead them astray. But when he delivers on his promise his wife refuses to leave the group and remain behind in Iran, while Saïd refuses to cross over to Iraq. Another ceremony is performed by the elder for the divorce, and the teacher relinquishes to the illiterate Halaleh his blackboard as promised in the dowry. As she walks away with her tribe in the fog (or maybe it’s poisonous gas?) the startling loud Kurdish music plays hauntingly in the background, as if it were bombs going off. There is also the ironical “I love you” written in chalk on the board, something Saïd tried to teach her to read but she refused.

Given the oblique nature of the script that swings without clarity from reality to fancy, Blackboards still works as a mesmerizing bit of storytelling despite all the confusion. It’s a stunning lyrical work of considerable force and truth. That part of the world might be mysterious and its methods of storytelling unfamiliar to the Westerner, but the struggle of humanity as presented is tangible. It is reflected in the sense of loss and human deprivation and the burdens the disenfranchised Kurds must carry on their backs just to barely survive. The persecution of the Kurds is an old story, but in recent times it has gotten worse and this film yearns to give the world a lesson about needless suffering. The images are bold and hard to forget. It feels like a film made from the heart. 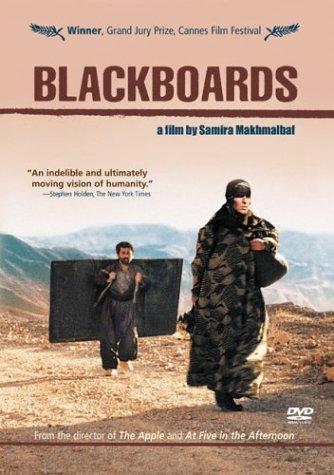