The Bitter Tears of Petra von Kant is Rainer Werner Fassbinder’s 13th of the 33 films he made in his short life and one that received international acclaim. It features an all-female cast, all uniformly smashing. “Bitter Tears” is a film based on a play Fassbinder wrote that makes no attempt to disguise its theatrical origins. The film is divided into five acts set in the same room, against the backdrop of a painted mural after Poussin. The painting gives a striking view of a male nude’s private parts. In this claustrophobic setting, the stirring emotional performances and the film’s long, elegant takes never let the viewer forget the high artifice of the dramatic situation.

“Bitter Tears” sketches an improbable lesbian relationship that teeters on the strength of dominance and submission. This psychodrama love triangle involves Petra von Kant (Margit Carstensen) as a manipulative wealthy woman, her willing slavish secretary and possible former lover Marlene (Irm Hermann), and an attractive model named Karin Thimm (Hanna Schygulla) with the common beauty of a working-girl and the ambition to climb the social ladder as a bisexual based on her figure. Fassbinder’s misanthropic point is that if you look below the surface, all human relationships are based on factors of master and servant. Love is mostly a substitute for possession or of putting demands on someone. Karin at one point cruelly explains her flawed love for Petra by saying: “I love you in my own way.” Other quotes that favor Fassbinder’s spin on the miserable human condition include: “People need each other but haven’t found a way to live with each other” and “Everyone is dispensable.”

Petra is a haughty, caustic, self-absorbed, successful fashion-designer living in Bremen. She lost one husband to a car accident, and gave birth to his daughter Gaby (Eva Mattes) a few months after he was buried. The starving-for- affection high-school-aged girl has been sent to boarding school and rarely sees her mother. Petra was also married and then divorced from a man she learned to despise, finding him so revolting that she says “He stank of man.”

Living with Marlene her subservient secretary, assistant and maid in a luxurious but cramped apartment, Petra displays contempt while bossing Marlene around despite her obedience, hard work, and uncomplaining attitude. When questioned about how cruelly Petra treats Marlene, she responds by saying that’s what she expects and wants. Upon a visit from her friend Sidonie (Katrin Schaake), Petra meets Sidonie’s friend Karin. She falls head-over-heels for the 23-year aspiring fashion model and has Karin move in with her. But Petra receives the stings of a one-way love relationship as Karin dominates the relationship with her insolence and unconcern about Petra’s feelings. Hopelessly in love with Karin, Petra will have a nervous breakdown after Karin tells her she had wild sex all night with a well-endowed American black serviceman, and that she will leave Petra for her husband who just arrived from Australia.

The big breakdown comes on Petra’s 35th birthday, some time after Karin has left her possessive grasp, when in a drunken state of shock Petra verbally insults all her houseguests (all the women characters in the film except for the absent Karin). Petra has lost control because Karin, on top of everything else, never even called to wish her a Happy Birthday. Adding to her despondent state is the arrival of her parasitic mother (Gisela Fackelday), who upon finding her daughter in love with another woman can only express shock and disappointment.

Petra’s recovery begins in the quiet after the storm when she realizes that love means more than possession and dependence. In the final act, to the sound of The Platters singing “The Great Pretender,” Petra offers a partnership to Marlene, who has been a silent witness throughout, but the secretary without saying a word to this generous (from Petra’s point of view) offer packs a suitcase and leaves. This stinging stylized drama of losing a love-object is consistent with Fassbinder’s ongoing theme of devastating irony in relationships and his setting the table with sensual atmospheric gloss and high-camp. It’s all played out without action in a non-stop verbal barrage, which should limit its audience to Fassbinder freaks and lovers of the unusual in drama and admirers of Douglas Sirk melodramas. 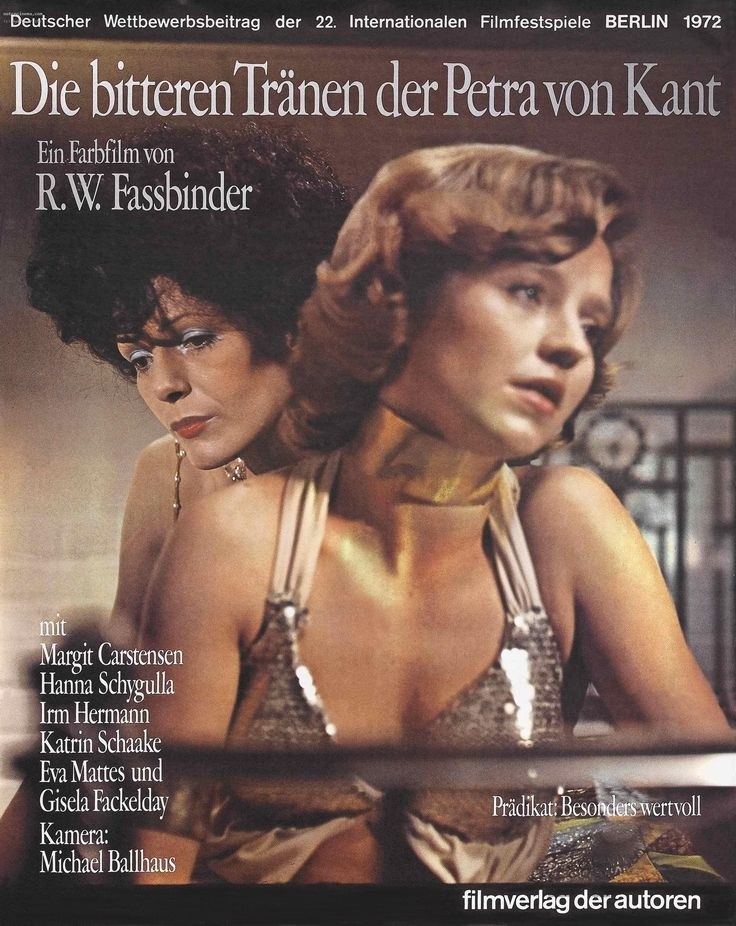