“It’s not top-notch Cassavetes, but is still watchable.”

The last film of John Cassavetes (“Husbands”/”Faces”/”A Child is Waiting”) is a wacko comedy takeoff on Billy Wilder’s classic noir Double Indemnity (1944), that only works in spurts. It’s a conventional sitcom, but Alan Arkin and Peter Falk are hilarious. My favorite one-liner is Falk’s aside about his ditso wife, deliciously played by Beverly D’Angelo–‘Her family is from New Jersey, so you know she’s well brought-up.’ Supposedly Cassavetes directed as a favor to Falk, but his good intentions only produces an average comedy that lacks an edge. Andrew Bergman wrote the screenplay under the name Warren Bogle.

Uptight suburban living LA insurance salesmanLeonard Hoffman (Alan Arkin) is depressed because his musically talented triplet sons have been accepted to Yale but without a needed scholarship he can’t afford to send them there. When the wealthy Yale grad boss of the large firm, Winslow (Robert Stack), refuses to use his influence to get the scholarship, the desperate agent sells the scheming sexy Blanche Rickey (Beverly D’Angelo) a ridiculous double-indemnity policy, whereby she collects $5 million if her con artist hubby Steve (Peter Falk) dies after accidentally falling off a train. When the conspirators carry out their railroad-related scheme two days later, they are uncovered as frauds in the autopsy by the insurance company’s head of security, O’Mara (Charles Durning).

From then on surprises abound, as it follows the Double Indemnity plot until it veers off into silly absurdist comedy. But it has things turn out fine in the end despite a few serious setbacks.

The comic antics are mostly too witless to satisfy those seeking more than low-brow comedy. The pic is aimed for commercial success, as it shamelessly tries to cash in on the success that writer Bergman had with actors Arkin and Falk’s in their previous box office hit The In-Laws (1979). It’s not top-notch Cassavetes, but is still watchable (especially for moments like the serving of a sardine liqueur as a man’s drink from Norway). 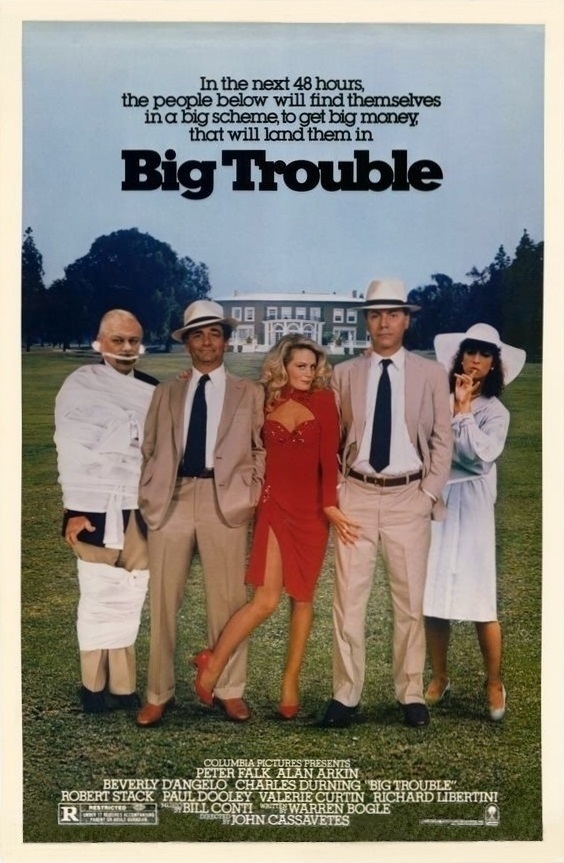