“John Ford recommended to his friend Walsh bit-part actor Marion Morrison for the lead, and for his first starring role he took the name John Wayne–the rest is history.”

This Western epic, the first in the talkie era, was shot simultaneously in the usual 35mm and in 70mm widescreen, a newly introduced but short-lived process called Fox Grandeur (similar to the later Todd-AO). In the 1990s it has been restored to its original wide-screen splendor. The film does a wonderful job in showing the impressively vast landscapes, the wagons fording rivers, the prairie schooners crossing the rough unsettled plains and climbing the steep cliffs in all kinds of weather, and the courage of the pioneers to take such a dangerous journey, more so than for its stilted narrative, unimaginative plot line, the stagy unnatural dialogue and its clumsy attempts at pioneer humor (a Swedish immigrant (El Brendel) has an ongoing battle with his mother-in-law and mule). It reportedly cost $2 million to make, but surprisingly failed in the box office. It’s filmed in a grand style by Raoul Walsh in the same tradition of The Covered Wagon (1923) and The Iron Horse (1924). Walsh intended to be the star, but sought a replacement after he lost an eye. John Ford recommended to his friend Walsh bit-part actor Marion Morrison for the lead, and for his first starring role he took the name John Wayne–the rest is history. Though after this film flopped for Fox, Wayne stumbled through the 1930s working on B Westerns for Poverty Row studios until Ford gave him his big break in the 1939 smash hit Stagecoach.

The saga tells of pioneers leaving from St. Louis to go by wagon train to Oregon and start life anew for their families in the unsettled West. Breck Coleman (John Wayne) is hired on to be scout by Mr. Wellmore because of his concern for the safety of the pioneers and his trust of Breck for his integrity, legendary ability as a hunter and detente in dealing with the Indians. What convinces Breck to go is that he believes the murderer of his recently killed trapper friend over pelts is also on the wagon train and he aims to get the proof and give ’em a taste of frontier justice. The three villains are the ruthless wagonmaster Red Flack (Tyrone Power, Sr., Tyrone’s dad), the ruffian Lopez (Charles Stevens), and smoothie gambler hustler Bill Thorpe (Ian Keith). The other reason for going is the lovely Ruth Cameron (Marguerite Churchill), traveling with her teenaged brother Davey and younger sister. Ruth becomes the romantic interest of Breck, who has quite a time gaining her confidence but acts as her protector when the baddie Flack leaves her stuck wagon stranded from the others and vulnerable to an Indian attack.

Breck, with the help of his old-timer pals Zeke and Windy, leads the pioneers westward: staving off an Indian attack, overcoming a snow storm, romantic complications, the hardship of traveling across the wilderness and the three villains trying to cheat the pioneers and kill him. It should prove to be interesting mostly to Wayne fans as an early take on the youngish looking actor before he became a legend and for film buffs it offers a look at the early primitive methods of filmmaking in the talkie era. 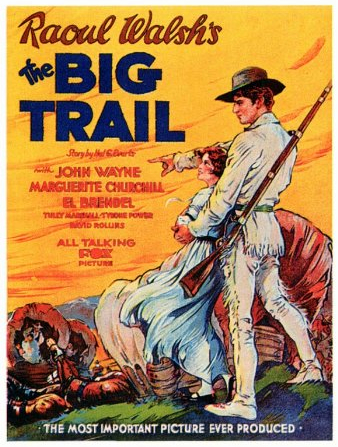