“They don’t get much better in noir films than this stark and gritty classic.”

This riveting noir thriller was made on the heels of the Kefauver crime hearings in the U.S. Senate. Dave Bannion (Glenn Ford) is the loving family man and inscrutable homicide detective sergeant, called in to investigate an obvious suicide of a veteran policeman. Concluding the investigation, he receives a call from Lucy Chapman who is suspicious about the suicide. Bannion visits where she works as a bargirl, skeptically listening as she tells him that she was Tom Duncan’s girlfriend and that he didn’t commit suicide. Bannion has a judgmental thing about women, looking at them as either saints or whores. Bannion’s wife is a saint, Lucy is a whore. But Bannion is dutiful so he goes back to the victim’s widow to recheck the reason for the suicide and she tells him again, it was because of a terminal illness. But Bannion is skeptical, as he is left without any doctor’s report as proof. Bannion also wants to know about the expensive summer home the cop owns and how he got it on a policeman’s salary. Bertha Duncan (Jeanette Nolan) is not pleased with the visit and telephones the crime boss in the city, Mike Lagana (Scourby), that she doesn’t want him around her house anymore. Lagana arranges with the police commissioner to get Bannion to forget the investigation.

Bannion is ordered the next day by his boss, Lt. Wilkes, to stay away from her, telling him there is pressure coming down on him from the higher-ups. But Bannion soon learns that Lucy Chapman was found tortured to death on a deserted road. It is out of his jurisdiction, but he still investigates her death. He knows her death was connected with her seeing him and now believes Lucy was telling the truth about Bertha Duncan, that she has replaced her husband on Lagana’s payroll because she has some incriminating evidence against the organization her husband left and is blackmailing them with it.

Bannion goes to Lagana’s house and tells him that he knows he’s behind all the city corruption and behind Lucy’s murder. Lagana retaliates by having his men put a dynamite bomb in his car, which kills Bannion’s wife instead of him.

Bannion is forced to go on a solo crusade when he discovers the police commissioner is on Lagana’s payroll and is suspended from the force after insulting him.

Bannion opens up a can of worms in his one-man crusade showing that the city is being corruptly run by the egomaniacal Lagana, and that the police commissioner and some city council members play poker with the crime boss’s henchman, Vincent Stone (Marvin).

Stone is a latent homosexual psychopath who does contract killings for the big boss, living with his moll in an abusive but materially rewarding relationship for her. The moll is the sexy and ditsy Debby (Grahame). The most unforgettable scene in the film is when Stone reacts violently when he learns that Debby was seen talking with Bannion and tosses a pot of scalding coffee at her, which permanently scars one side of her beautiful face.

There is no stopping Bannion now as with the methodical ease of a professional hit man he takes on the syndicate. Bannion uses his anger from his wife’s murder and the contempt he has for his fellow officers’ cowardly behavior, to take it out on the mobsters. Bannion becomes just as menacing in his actions as the crime boss, leaving a trail of death behind him.

Bannion’s solace comes when his faith in human beings is restored by the following: a crippled secretary (Evanson) goes out of her way to help him identify the one who killed his wife, old army veterans who served with his in-law band together to protect his threatened young daughter, and when some of his fellow officers can’t take the corruption anymore they stop worrying about their pension and disobey their orders to offer him support.

The film’s title is derived from ‘the big heat’ that comes down on the gang when Mrs. Duncan’s death releases all the dirt on the syndicate. For Bannion, this is seen as a hopeful sign that people can change. Debby’s courage to go after Vince, allows him to return to being a homicide detective. Debby’s death caused by Vince gives her salvation in Bannion’s eyes, as it allows her to be cherished for her good side that has at last won out from her bad side. Bannion can now tell her about his wife before she dies, as he no longer considers her to be a whore.

They don’t get much better in noir films than this stark and gritty classic. It has the signature of Lang written all over it, with outstanding performances from a cast that puts their stamp of reality on the film. Its nihilistic message about humanity is scarring: Glenn Ford’s Pyrrhic victory seems to have a cynical feel to it, meaning that violence and corruption go together in city politics like ham and eggs. It has many of Lang’s concerns put into the film: about a corrupt society, sadistic violence, the corruption of police officers measured against the stark goodness of other police officers, and the revenge motif that the film is steeped in, which allows Lang to show that by doing what is right you must pay a dear price. Institutions break down in the face of corruption and Lang believes that it is only through individualistic acts that the institutions can be saved. This is a dangerous film meant to upset the establishment figures, its message is not an easy one to receive. 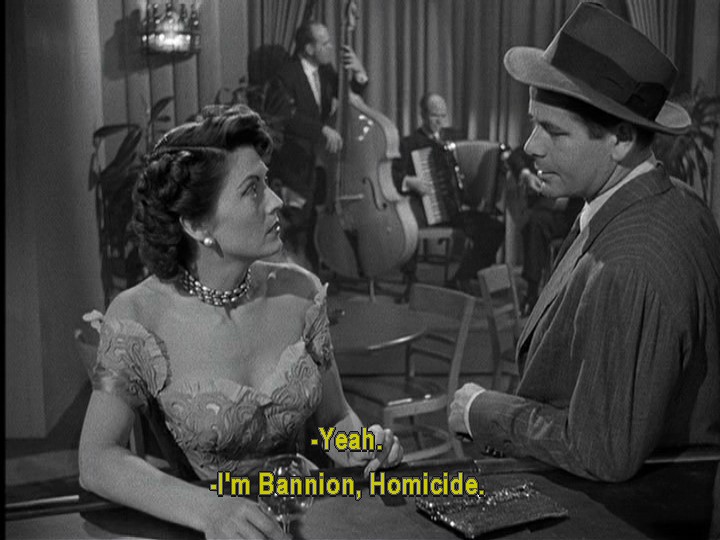