“One of the film’s major themes is “things are exactly as they appear.” Unfortunately everything appeared vacuous and annoying.”

Just a dreadful effort at a comedy film noir by director George Armitage (“Miami Blues,”1990/”Grosse Pointe Blank,”1997), adapted to the screen by Sebastian Gutierrez from the glitzy novel by Elmore Leonard. A novel that was written to be cinema friendly but is just butchered in the filming and all its potential charm is drained out of it, so much so that it isn’t even mildly entertaining. The book, Leonard’s very first crime novel, was adapted once before in 1969 with Ryan O’Neal in the Owen Wilson role, but was also a misfire.

One of the film’s major themes is “things are exactly as they appear.” Unfortunately everything appeared vacuous and annoying. Everything that could be wrong was, except for an occasional one-liner (“God is an imaginary being created by adults”) and perhaps a diverting scenic travelogue shot here and there (those surfers taking on a big wave). All the characters were unpleasant types, played by thespians who seemed amused at making this film. But their own joyous vacation-like attitude didn’t transfer on film, as I found it all tedious. The Big Bounce in reality had nothing to its bounce, including its uninvolving twisty amoral ending and a padded story that was pointless and grating. Because it was such a lazily drawn caper story and the lead character failed to gain audience sympathy as he acted like a jerk, the whole project felt sitcom-like empty. It’s also one of those films that goes out its way to insult the audience’s intelligence, as it seems to think its relaxed take on petty crime and its objectification of women is so darn cute and irresistible.

The film is set in gorgeous Hawaii, where all the gals are lookers and the beaches are pristine and the surfing is a travel agent’s dream as a selling point to tourists. Genial small-time con artist and petty thief Jack Ryan (Owen Wilson) is on the north shore of Oahu, where he works for an unethical and mean-spirited sneering real estate developer Ray Ritchie (Gary Sinise) of Ritchie Global. They’re tearing up the environment to build a hotel resort and are met by native Hawaiians protesting. Jack works on the construction site and in some kind of ridiculous spat with his racist foreman (Jones), whacks him with an aluminum baseball bat. District judge Walter Crewes (Morgan Freeman) gets the assault charges cleared and hires Jack to work in his small bungalow resort for his own nefarious purposes. The Gary Sinise character is a one-dimensional villain with some underworld ties. His main purpose in this pic is to be pushed down a flight of stairs after being drugged, as the film’s Big Bounce plot swings into action. Willie Nelson and Harry Dean Stanton are just happy to be playing an ongoing game of dominoes, which has nothing to do with the story and their rambling conversation was neither funny nor interesting. Charlie Sheen plays Bob Jr., a flunky to Ray, whose main purpose in the story is to receive a punch in the nose. Bebe Neuwirth plays Sinise’s wife, who is a boozer and will shoot someone as part of the twisty plot. Sara Foster is Nancy, who is Sinise’s mistress and Sheen’s part-time bang and will also attract Owen Wilson as a love interest, as the former magazine model gets over by slipping in and out of bikinis and other flimsy garments showing us everything but full nudity. She’s the eyeful to keep the men in the audience diverted until she becomes a major player in The Big Bounce plot, as the film banks on the viewer not caring if anything makes sense or adds up to anything other than being a goofy film.

The plot boils down to Sara Foster using her sexual guile to get Owen Wilson to rip off $200,000 from a safe in Sinise’s beach house, but instead he is being set up for the murder of Sinise. It seems Neuwirth and Freeman have a reason for wanting him out of the way.

It was obvious that this story was going to come down to each character playing the other off while looking for an angle to make their move, but what wasn’t obvious was how uninteresting and trite this all was and how little I cared about was happening. But the filmmaker got one thing right: “things are exactly as they appear.” 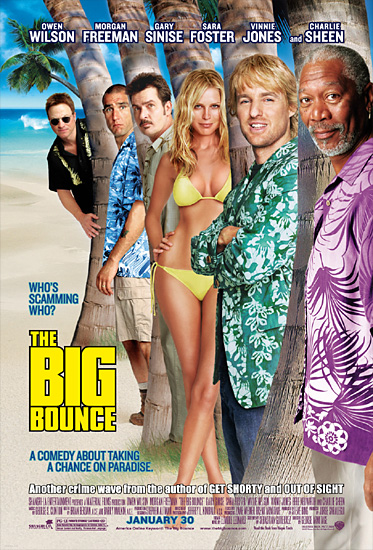