“A genial, whimsical, fantasy film about the true meaning of Christmas.”

A. Edward Sutherland (“Palmy Days”/”Dixie”/”Murders in the Zoo”) directs a genial, whimsical, fantasy film about the true meaning of Christmas being for people to be kind to one another. It’s based on a story by Adele Comandini and Mildred Cram, and Comandini also wrote the screenplay. Its sentimental feel-good mood reminds one of Frank Capra’s classic “It’s a Wonderful Life” (1946). The film’s major problem is when it changes moods from its lighthearted opening to its more serious message-orientated ghost story, but it never goes beyond tomorrow and grows increasingly tiresome. It’s only the charming performances of the three old codger leads that keep things mildly entertaining.

George Melton (Harry Carey Sr.), Alan Chadwick (C. Aubrey Smith) and Michael O’Brien (Charles Winninger) are three elderly, wealthy bachelors who not only are business partners but live together in a Manhattan townhouse; their servants are doting Russian immigrants Josef (Alex Melesh) and Madame Tanya (Ouspenskaya). The trio feel lonely on Christmas Eve when their society guests spurn their dinner invitation. This leads them to become pensive about what they missed in life by being so materialistic and self-absorbed.

The always cheerful O’Brien wishes to prove his faith on the goodness of mankind and convinces the mellow realist Chadwick, the former British Army major, and the tortured soul, cynical, pessimistic and gruff Melton to each put $10 in their wallet, along with their business card, and throw it out the window onto the city streets to see who returns the wallet. The two who return the wallet are the handsome, unemployed, misplaced Texas rodeo rider James Houston (Richard Carlson), an aspiring country singer, and the pretty transplanted New Hampshire kindergarten teacher Jean Lawrence (Jean Parker). They are befriended by the trio, who invite them to dinner.

The trio head for a business meeting by plane, but it crashes. They now return to their luxury townhouse as ghosts and try to intervene to bring the young couple together, as they recognize that Houston is concentrating on his emerging singing career and not paying as much attention on Jean as he should. The Texas cowpoke is discovered by divorcee (Helen Vinson), who not only promotes his career but has designs on roping him into being her lover. The boys think that would be a mistake, since Jean is the one he loves and feel that he’s making the same mistake they all made of spending too much time trying to advance their careers and not enough time finding the right mate. The trio put off their visit to heaven until they can help settle things between the lovebirds. 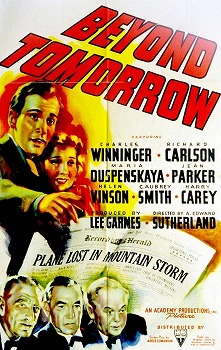