BEYOND, THE (THE SEVEN DOORS OF DEATH) (E TU VIVRAI NEL TERRORE-L’ALDILA)

The film is set at a decrepit and spooky hotel, it has a character with green contact lenses who stares into the camera for effect and it features zombies from the beyond. Its main asset is the gross makeup job to the thesps by Gianetto de Rossi. I found its wooden acting, clumsy presentation and lack of storyline coherence, something to laugh at. But those who favor Fulci’s filmmaking style, ignore these faults and instead rave about his entrancing horror pic images and sometimes stunning surreal ones.

It’s based on a story by Dardano Sacchetti and is written by Sacchetti, Fulci and Giorgio Mariuzzo.

It opens in 1927, Louisiana, where a hostile mob whips to death with chains an artist guest at the “Seven Doors Hotel”— awarlock named Schweik. Before dying he puts a curse on the joint. The pic then returns to the present, in Louisiana, in 1981, where a young woman from NYC, Liza Merril (Cationa MacColl), inherits from her rich uncle the same hotel where the satanist Schweik was killed and moves in. Liza foolishly starts remodeling. After a series of supernatural ‘accidents’, she learns that the building was built over one of the entrances to the Seven Gates of Hell and learns this is not a good thing.It follows along the same lines as Michael Winner’s The Sentinel (1977).

This pessimistic pic, which Fulci meant to be viewed as a ‘series of images,’ plays out as a weirdo energizer for the stoner midnight crowd and those lovers of nightmare pics that can’t be pinned down by words. It has become a cult fave and is considered one of Fulci’s best, if not his best. After being only slightly bemused by such chilling visuals and mostly turned off, you could say either I missed the beauty of Fulci’s gore or was properly repulsed by such artless efforts to entertain by shock. 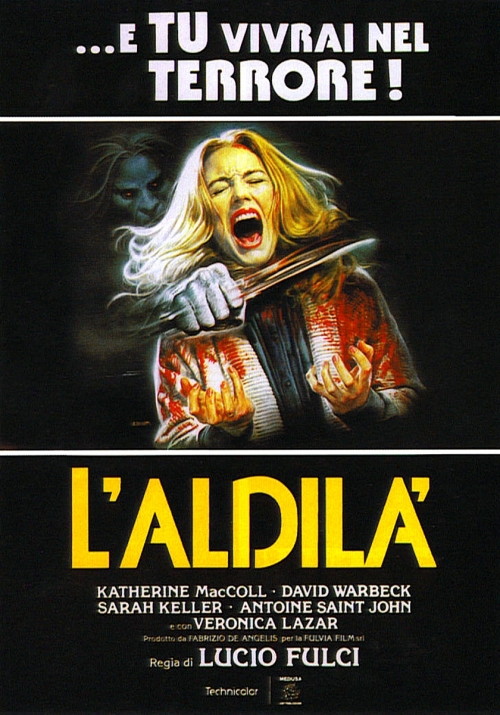