“Most of the musical numbers were inconsequential.“

Edward Buzzell (“At The Circus”/”Go West”/”Song of the Thin Man“) bases the film on a lightweight Broadway musical. Under Buzzell’s heavy-handed uninspired direction, the film hardly puts its best foot forward. The studio bosses woo the youth market, while making it a star vehicle for MGM’s newestacquisition Lucille Ball. The star moves over from playing in cheaply made B films for RKO to this glossy A production film in gorgeous Technicolor, where she gets the full star treatment. Five cast members from the original show (Tom Dix, Nancy Walker, June Allyson, Jack Jordan and Kenny Bowers) are retained (though some in different roles), as are all of the musical numbers except for “Shady Lady Bird.” The bland film offers a few peppy numbers like “Buckle Down, Winsocki” and, added for the movie, Harry James’s signature number “Flight of the Bumblebee” and “The Two O’Clock Jump.” Also added was Lucy singing “You’re Lucky” (which was dubbed by Gloria Grafton). Unfortunately most of the musical numbers were inconsequential, as staged by Charles Walters.

MGM’s leading musical producer Arthur Freed pushed to do the film after catching the 1941 stage version in New York, and the studio bought the rights from Columbia. The film turned a nice profit, though its old-fashioned formulaic story was banal and never caught my interest. It’s based on the book by John Cecil Holm, with Holm, Irving Brecher and Fred Finklehoffe providing the screenplay.

Lucille Ball is a popular glamorous Hollywood actress whose star is fading and reluctantly agrees to a publicity stunt her nervy agent Jack O’Riley (William Gaxton) arranges in order to get her name in the newspapers to pique the interests of the studios, as she travels 3,000 miles east by train to attend in a small town in Pennsylvania a senior prom at Winsocki military prep school after a senior cadet, Bud Hooper (Tommy Dix), writes her a fan letter and asks her to be his date. Bud is surprised she accepts, which complicates things since he promised his girlfriend Helen Schlesinger (Virginia Weidler) he would take her to the prom and now has to lie to her that he’s sick. To the rescue come Bud’s playful cadet friends, Dutch Miller (Kenny Bowers) and Harvey “Hunk” Hoyt (Jack Jordan), who convince the naive Bud to take Lucy to the prom under Helen’s name. The awkward situation leads to a misunderstanding between Lucy and the jealous Helen, when Helen unexpectedly comes to the prom. Things escalate out of control when the school authorities threaten to expel Bud for lying, when they discover the truth. But predictably there’s a happy ending for everyone, even after the newspaper photos of Lucy causing a riot at the prom by hayseed local reporter Chester Short (Chill Wills) go national. But things get patched up as expected and everyone walks away with a smile–except the not targeted audience, who had to endure such stiff comedy, awkward acting, forgettable music and a trivial story line.

For vile comic relief, the supposed ugly duckling Nancy Walker is a rejected blind date who is bellyaching throughout the prom that she can’t even get a cadet to dance with her because of her looks. 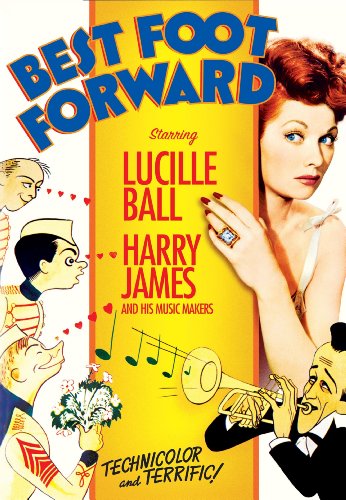