“It’s the crowning achievement for the prolific filmmaker.”

It’s the crowning achievement for the prolific filmmaker Rainer Werner Fassbinder (“Qurelle”/”Lili Marleen”/ “Lola”), whose short life came to an end in 1982 when he died at the age of 37 from a drug overdose. The film is a fifteen-hour-plus epic, comprised of 13 episodes and an epilogue, and is based on the acclaimed novel by Alfred Döblin that was written from 1927 to 1929. Döblin converted from Judaism to Catholicism, and in the undercurrent of the novel there’s a subtle religious theme running through it that reflects this conversion from Old to New Testament. Under the artistic guidance of Fassbinder, the historical novel about the ordinary low-life German–a subject I dare say not too many others can match the first-hand knowledge of the filmmaker–is made strangely into a startling fantasy of Fassbinder’s own life and a searing cynical portrait of the common man’s struggle to survive at the time of an economic depression and when the country has lost all hope in its leaders. The dreary melodramatic plot is not the thing here, as it plays out as a series of brutal stories one would find in the tabloids about the disenfranchised; the power of the film is in how it could be seen by the thoughtful viewer as either a “passion play” or a psychological drama like James Joyce’s Ulysses or as a work filled with Freudian symbolism. In all the rough stuff between the sexes, there’s a pure love to be found through suffering. The characters, mostly whores, pimps, thieves and political extremists, are nevertheless treated with a great tenderness who just as often get things wrong as right. Because the times were so bad, things easily go wrong here; and even though they weren’t Nazis, their blind actions led to fascism.

Gunter Lamprecht, in a tour de force performance, plays the childlike teamster-turned-pimp Franz Biberkopf, who seems like a lost soul when released in the summer of 1927 from Tegel prison after serving four years for a rage murder, using an eggbeater to pummel his prostitute girlfriend Ida because she was leaving him for another man. Franz is a little bit off when released, not used to his new freedom, and visits his victim’s sister and attempts to rape her; but he instead leaves her and soon starts a live-in romance, which he deems as real love, with the Polish barfly woman Lina. Franz vows to “become an honest soul” amid the corrupting Berlin landscape of the Weimar-era Germany, and no longer will pimp or steal or do anything to break the law. There are hints of the Third Reich to come, even though the author, who saw them as only cartoonish boobs, had no idea that they would be taken seriously and come to power in the next decade.

By not engaging in criminal activity, Franz finds it close to impossible to get by in the late 1920s. The economic conditions are unbearable for the ordinary citizen, and Franz’s attempts go nowhere when he sells in the street tie pins, porn or a Nazi newspaper, which adds to his woes because he antagonizes his former leftist friends when they see the apolitical Franz in the street with a swastika armband. Franz next goes with his Uncle Otto on a door-to-door job selling shoelaces and brings joy to a grieving widow by gently fucking her when she finds he has an uncanny resemblance to her husband; afterwards she thanks him with some marks. When he tells Otto, the slimy guy betrays Franz’s trust and threatens the widow and shakes her down for money by blackmailing her. Franz’s simplistic faith in humanity is shattered and he runs away without saying anything to Lina. His withdrawal from the world is not a Buddhist retreat, as he goes on a continual drinking binge. Franz then meets an ex-felon petty crook, Reinhold (Gottfried John), who stutters and will irretrievably change his life. He bonds with Reinhold, but refuses to join his group of burglars led by the sharply-dressed debonair leader Pums. But he does, out of friendship, agree to take in Reinhold’s women when he tires of them. The pathological Reinhold doesn’t know how to give them the boot, even though he’s not adverse to treating them abusively. When the third women is about to arrive at his doorstep, even Franz has reached his limit and refuses–which infuriates Reinhold. The friendship is seemingly one way, as Reinhold considers Franz both dumb and operating with a screw loose. Due to some odd circumstances, Franz ends up going with Pums and his gang on a night robbery and is forced to be the lookout. Franz thought he was going on a fruit delivery, and balks when he learns of the real mission. After the robbery, Franz is riding in the back of the escaping van with Reinhold. A car is spotted following them and Reinhold in a panic, thinking only of protecting himself, pushes Franz out of the car. Franz is run over by the sporty couple following the car for kicks and has his right arm amputated. He’s nursed back to health by his former prostitute girlfriend Eva (Hanna Schygulla) and her new pimp Herbert. Franz surprises everyone when he refuses to go after Reinhold. Though he now breaks his vow to be a good citizen, saying there are no opportunities for a one-armed man in Berlin to live honestly and survive. Soon he becomes prosperous as a fence when he hooks up with a master thief named Willy. Eva then hooks him up with an angelic woman he names Mieze, who works the streets as a prostitute. There are a serious of melodramatic events before Franz is arrested for the murder of Mieze that the sinister Reinhold committed, and he is sentenced to an insane asylum. There he’s eventually cured and released as someone safe again to return to society. He’s now seen as a drab ordinary citizen, nothing special (Think Clockwork Orange’s method of dealing with violent patients!), who can be visualized as one of the masses who will probably later get sucked into the cheering hordes of “normal” citizens who were blindly led along by the Nazi demagoguery (Think Iraq War and War on Terrorism, and see that the blame can’t be solely layed on Bush and his cronies without also blaming those who blindly went along with him–the uninformed masses, the corporate medias failure to report the truth and the breakdown in the political process!).

This is an astonishingly well-conceived, well-acted and well-presented work of epic proportions; the plot doesn’t do justice to how it results in being so monumental an achievement. Besides also being a work of great literary merit, it has a subversive bent that bores its way through all the urban noise and muddle to find an unconditional love in its fallible main character that might not be fully understood or seen by him or society but is nevertheless real. But that boundless love is lost when he’s rehabilitated for good into a normal being and loses any edge. 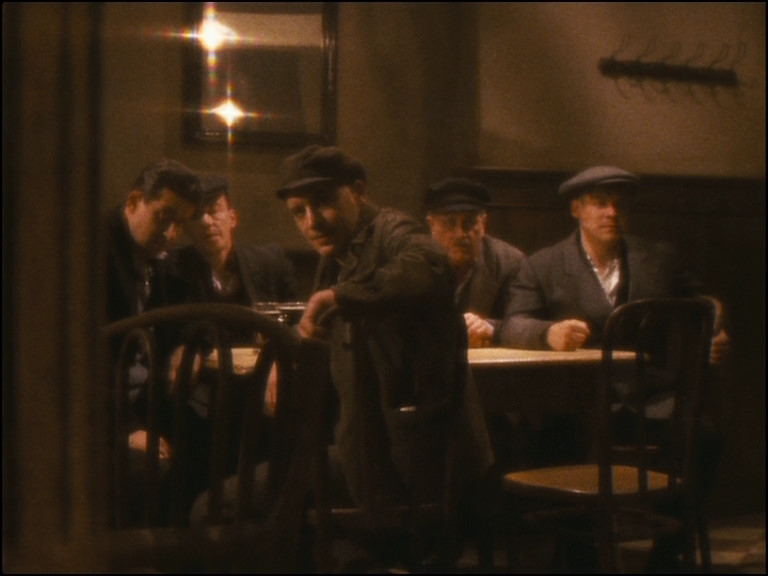