An overlong but sturdy biopic on the complex troubled First World War poet Siegfried Sassoon (played with vigor as a younger man by Jack Lowden and with pent-up emotions as an old man by Pete Capaldi). Sassoon served gallantly in battle (receiving medals) even as he became a vocal critic of his government’s forever wars during and after the war.

It’s written and directed with aplomb by the esteemed gay Brit filmmaker Terence Davies(“A Quiet Passion”/”Distant Voices, Still Lives”), who has found a kindred spirit to console and be consoled by. Throughout his life the poet’s powerful imagery was evoked by his brutalizing experiences on the Western Front and the recurring nightmares he has from the war provide his best poetic imagery. While his sharp wit was used as a barrier to stave off those he disliked and keep the world from squashing him.

The poet had a large following among the aristocracy and theatrical world, and embarked on many homosexual encounters (all ending badly) until seeking salvation in his marriage to Hester Gatty (Kate Phillips), lasting some thirty years, and in his conversion to Catholicism–seeking conformity through religion.

He’s viewed by the director as a troubled man seeking acceptance and peace of mind, someone locked into an existential trauma he can’t escape from. It’s a fine lyrical film that observes its subject as an enigmatic man who doesn’t know how to give his questioning kid answers on how to handle the future. 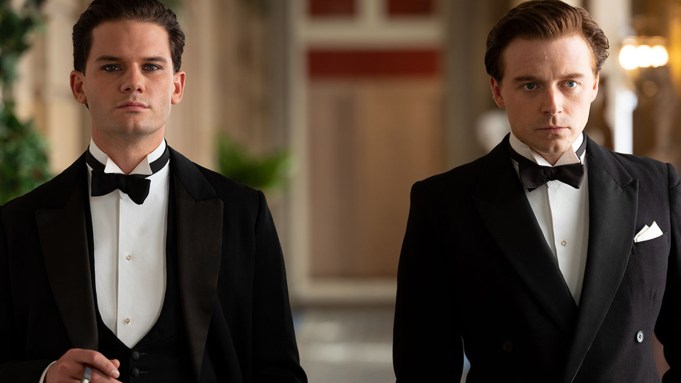