“Evidently the public didn’t like Eastwood in this sleazy role and stayed away in droves.”

A strangely alluring melodrama that combines the conventions of the Western and Grand Guignol. Clint Eastwood goes against his typecast as the action hero and plays an unsympathetic womanizing loser who eventually becomes manhandled by a group of scorned women whom he has manipulated for sexual favors; this is the only film, I believe, that has Eastwood’s character killed off. It’s based on the novel by Thomas Cullinan and written with no compromises by John B. Sherry. Director Don Siegel (“The Killers”/”Dirty Harry”/”Invasion of the Body Snatchers”) keeps it elegant like an arthouse film, and is greatly helped in that endeavor by the lush photography of Bruce Surtees. Siegel has stated that this was his favorite film. It’s a twisty sexual southern gothic film that was a forerunner for Eastwood’s own Play Misty for Me and Tightrope. It reminded me of Ford’s underrated Seven Women (1966).

It’s set during the latter part of the Civil War. Corporal John McBurney (Clint Eastwood) is a wounded Union soldier who finds refuge in an isolated private seminary school for girls in the Deep South, and is not reported but is instead kept in the locked music room and nursed back to health by the headmistress Miss Martha Farnsworth (Geraldine Page), the teacher Edwina Dabney (Elizabeth Hartman), the black slave Hallie (Mae Mercer) and the six girl students. The hunky soldier’s presence gets the females hot and when he’s caught in bed with the slutty seventeen year old student Carol (Jo Ann Harris), the jealous emotionally un-balanced young teacher Edwina, who thought she would have soldier boy all to herself, pushes him down the stairs. The sexually frustrated Martha, whose brother ran away after a longtime affair with her, amputates his leg. When the soldier wakes up to discover this, he accuses Martha of getting revenge on him for not going to her bedroom after she unlocked his door. A drunken McBurney orders the girls around and chortles that he plans to have sex with any girl who wants to or else he will alert the Union camp. But when he’s in the middle of this fit, he accidentally kills the pet turtle of the 12-year-old Amy (Pamelyn Ferdin), the girl who found him in the woods and brought him to the school, and she quickly changes her high opinion of him and serves him poisoned mushrooms for dinner with Martha’s blessing.

There’s an intriguing blend of horror and sensuality that however borders close to being misogynistic, as Eastwood’s crude deserter chauvinistic soldier exploits the repressed southern belles by beguiling them with sex and bringing out their worst feminine traits. Evidently the public didn’t like Eastwood in this sleazy role and stayed away in droves. Though the film was a great departure from previous Siegel and Eastwood films, there’s something compellingly watchable about Eastwood as the imperiled man. 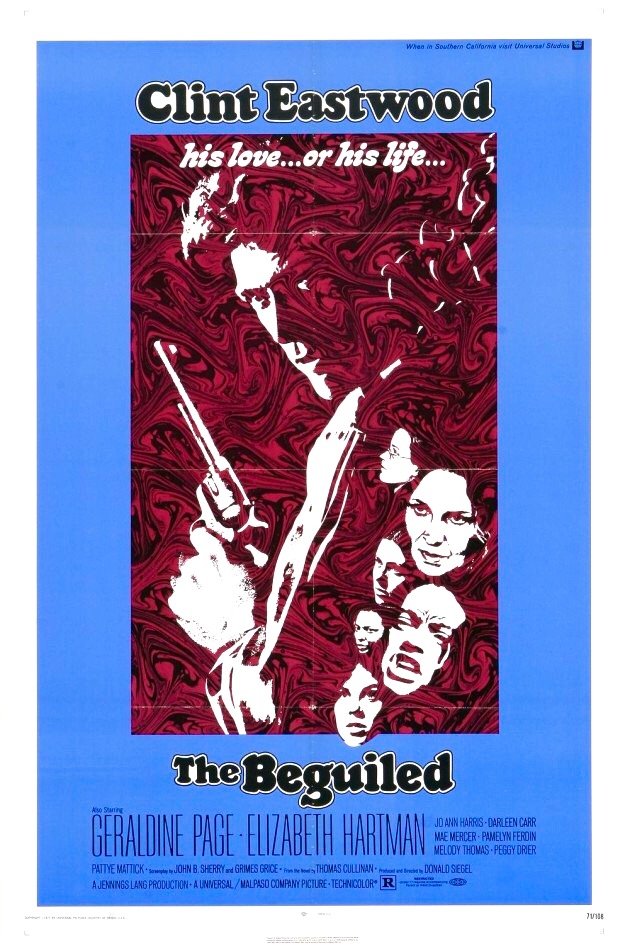