BEFORE THE DEVIL KNOWS YOU’RE DEAD

The 83-year-old Sidney Lumet (“Gloria”/”Find Me Guilty”/”Q & A”), who has been making films for the last fifty years, is still spry enough to helm this part perverse dysfunctional family story (keying in on sibling rivalry) and part crime story (a botched heist). It’s deftly written by playwright and first-time screenwriter Kelly Masterson. Though it doesn’t always add up, the bleak movie remains tense, interesting and unpredictable throughout. It depicts that “The world is an evil place,” as uttered with stinging glee by an untrustworthy 47th Street diamond-cutter to a former diamond-cutter who just lost his wife in a robbery and has lost his sons but doesn’t realize it.

Brothers Andy Hanson (Philip Seymour Hoffman) and the younger Hank (Ethan Hawke) are opposites. Andy is strong, scheming and ruthless, who is a high-living corporate payroll exec for a large real estate firm earning a six figure salary but who also has an expensive drug habit and insecurity problems over never feeling loved for himself and problems with impotency. Hank is a weakling loser, who has a low paying job, is divorced and is a deadbeat dad with difficulty meeting his child-support payments to his bitchy ex (Amy Ryan) while also trying desperately to maintain a good relationship with his snippy spoiled daughter. Gina (Marisa Tomei) is the sexy bimbo-like broad married to the obese Andy, who demands materialistic comforts and good sex, as their relationship is strained because he can’t please her in the bedroom. The last time he satisfied her was while they were on vacation in Rio. Gina is having a secret affair with the handsome Hank, who can screw like a porn star.

Both brothers are in need of bread, and Andy, also worried about an IRS audit at his firm that will snag him as an embezzler, schemes to have Hank rob their parents’ mom-and-pop jewelry store in a Westchester shopping mall in a simple plan that requires no violence. The rationale is that no one loses, it’s a victimless crime, as the insurance company will pay back their parents for the loss. Hank is insecure about the job; so he hires a loose-cannon thug acquaintance from Red Hook, Brooklyn, Bobby (Brian F. O’Byrne), to pull off the heist. Bobby uses a real gun and the clerk is unexpectedly replaced by Nanette (Rosemary Harris), Hank’s mom. Everything that could go wrong then does go wrong, as the stickup leaves Bobby dead, the store owner in a coma she will never come out of and Hank fleeing in shock in the rental getaway car.

The film goes into flashback and covers a number of different scenes at different times before the robbery. The disjointed time sequences, with time going back and forth, makes things fuzzy at first, but as the robbery story gets more complicated things gradually become clearer and begin to make sense as to why the brothers are so desperate and greedy for dough and willing to go down this sicko path.

Hoffman, as the ambiguous hulking smarty-pants main villain filled with repressed anger over his miserable childhood, comes through with a tour de force performance that sends this dark family melodrama spinning into the realm of Greek tragedy. The usually reliable Albert Finney, surprisingly strident, gives the film’s weakest performance as the grieving judgmental father; he’s a tough-minded ex-diamond cutter from Manhattan, who fled to the safe life in the suburbs and couldn’t help himself from always favoring the cutie-pie youngest son over the brooding older one and now pays the price for that neglect. 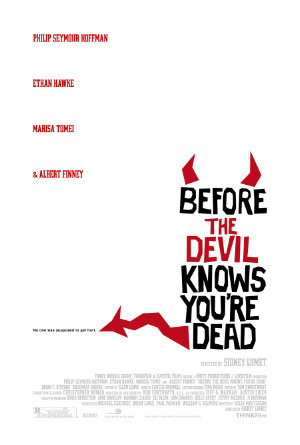