“What it fails to do is tell a coherent story, as everything about this exaggerated tale is hopelessly lost in a sea of silliness and generalities.”

A farcical political drama, done in the manner of a TV spoof. The Bosnian born and now naturalized British subject, writer/director Jasmin Dizdar, aims at taking the Bosnian war into London to examine the continuing ethnic hatred among his countrymen. He also ambitiously wants to examine Britain’s false sense of idealism. An ensemble cast carries off the comedy by making use of irony, as it shows in a clichéd manner how the British are stand-offish and all the immigrants are earthy people. What it fails to do is tell a coherent story, as everything about this exaggerated tale is hopelessly lost in a sea of silliness and generalities.

The main thrust of the film is about the diverse immigrants from the former Yugoslavia bringing their old battles to England and then ingratiating themselves into the English system, as they try to save England from becoming too stale and regal.

The characters are: a depressed obstetrician — in the middle of a raging battle with his estranged wife for control of his spoiled children; a Bosnian refugee couple the physician becomes the guardian angel to, as he talks the couple into not killing their new born daughter (the wife was raped by enemy soldiers); a heroin addicted youth living at home, with his stereotyped cartoonish parents, who suddenly changes his wasteful life after he acted like a hooligan going to a soccer game in Rotterdam. He ends up nodding out in the airport baggage bin and gets transported to Bosnia, where he becomes a war hero and the guardian of a blind child; a Scottish BBC journalist wracked with guilt for being a survivor of the war who comes down with the “Bosnian thing,” as he wishes to take the place of the victim he saw lose a leg and wants a British doctor to saw off his leg; and, finally, a rebellious young lady doctor who flaunts her Bosnian immigrant boyfriend in the faces of her stuffy, conservative, upper-class family and marries him, even though he can’t speak English and she knows nothing about him.

It is also about the need for the Bosnian immigrant to let go of his past and reinvent himself when living in England. The ones who can’t, we are warned, will end up only reliving the war they left behind them. This is shown as a Serb and a Croat from the same village in Bosnia, who when they spot each other on a London bus, get into a fist fight. After beating each other up, they wind up in the same hospital ward and continue their fight till death. There is also a nationalist from Wales in the same ward who says he can’t stand the English because they tried to steal his language away from Wales and that no one from Wales could afford to buy a home there anymore — only the British can afford to. The nurse on the ward tells the Serb and the Croat “You have the same size slippers. Isn’t that extraordinary?” There was an attempt to show that besides speaking the same language and looking alike, the two feuding ethnic groups have a lot in common.

This film, commissioned by the British Film Institute and made for a budget of about 1.8 million dollars and shot in 35 days, is rife with rapid cuts, scenes that seem disjointed and unconnected. It just seems like an incomplete movie, and one that rubbed me the wrong way with its pat messages. However, it did win the Prix Un Certain Regard for Best Film at the 1999 Cannes Film Festival. 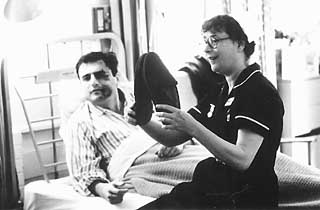