“The unsympathetic characters and their slight adventure story was never compelling.”

Whit Stillman (“Metropolitan”/”The Last Days of Disco”) is the writer, director and producer of this semi-autobiographical lightweight romantic comedy about the cultural differences between Spain and America, as seen through the eyes of two tarnished mismatched American preppies. It’s set during the ‘last decade of the Cold War,’ in the 1980s. The sitcom-like charm soon gives way to a literate but uninspiring talk-fest about nothing much more than the American protagonists living up to being immature, if you will, and acting like “Ugly Americans.” Barcelona looks beautiful, but the uninvolving story never gathers any emotional value and the laughs in this droll comedy of manners venture are few.

The arrogant, skirt-chasing and acerbic Fred Boynton (Chris Eigeman) pays a surprise visit to his prim, self-absorbed and neurotic cousin Ted Boynton (Taylor Nichols), who is not too happy to see someone he’s never liked since childhood but, anyhow, allows him to crash in his pad. Ted is a sales representative for an American firm in Barcelona, while Fred’s a naval officer, via ROTC, who is an advance man for a NATO visit by the U.S. Sixth Fleet.

Barcelona has a strong anti-American attitude, with much America bashing and graffiti on the walls calling the Americans fascists and pigs. Both young men quickly become involved with sexually liberated Spanish women, which has them on the defensive about their politics and being Americans. Fred is with party girl Marta (Mira Sorvino) and Ted with translator Montserrat (Tushka Bergen), who lives with the violently anti-American Spaniard named Ramon (Pep Munne). They talk endlessly about such things as sex, trade unions, politics, religion, culture, shaving the correct way with a razor, sales and American imperialism. Ted secretly reads the Bible, while hiding it under a copy of the Economist, and shuns politics in favor of the disco life. He has a notion that going out with beautiful women is no good for him because he gets too excited to ever see the real woman.

The belligerent and loud-mouthed Fred refuses to back down from his unabashed patriotism, which gets him shot as a spy. Ted visits him in the hospital with his ex-girlfriend Montserrat (she listens to Ramon’s anti-American rant and dumps him) and prays for his recovery.

The unsympathetic characters and their slight adventure story was never compelling; this sophomore film by Stillman makes the bogus point that Americans got a bum rap from Europeans (think Vietnam and the American industrial-complex!). It also seemed clunky, as the breezy story suddenly shifts into a life-and-death melodrama in the last act without making it a smooth transition. 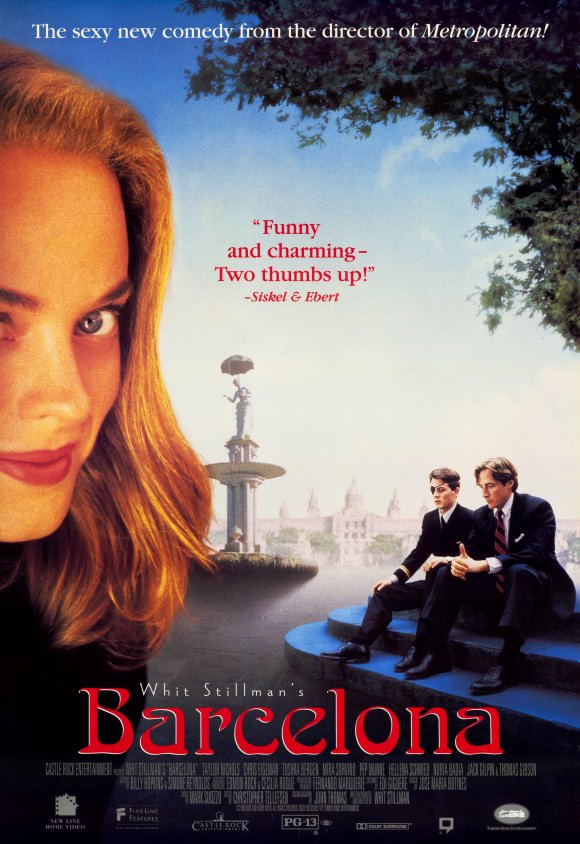