“A spoof on spy movies that generates few laughs but scores high for being bizarre.”

A spoof on spy movies that generates few laughs but scores high for being bizarre. This is the forgettable feature directorial debut of Robert Ben Garant (“Hell Baby”/”Reno 911!“), who lamely co-writes this inane one-joke mess with the actor Thomas Lennon. It starts off passable but grows increasingly tiresome at the half-way point and turns into a shamelessly bad film. Its not even original, as the plot is ripped off from Enter the Dragon.

It opens with the humiliating defeat at the 1988 Seoul Olympics of young Randy Daytona (Dan Fogler). The child prodigy pingpong player, some 19 years later, is reduced to being a washed-up player in Reno doing a weary stage act on pingpong skills. He’s recruited by the FBI agent (George Lopez) to infiltrate an underground pingpong tournament run in an undisclosed location by the ruthless international arms dealer and Triad leader, Feng (Christopher Walken), as the FBI wishes to put him out of business. Randy’s gambling marine dad (Robert Patrick) was killed by Feng for losing an Olympic wager on his son, which gives Randy incentive to take this assignment.

Fogler manages to look frightened throughout and consistently perform pratfalls, but is not funny or appealing. Walken is flamboyant in a campy role that is wasted here. Lennon as Randy’s German Ping-Pong rival has little to do but be a nutty outrageous German.

Its best asset might be its marketing slogan: “A huge comedy with tiny balls.” 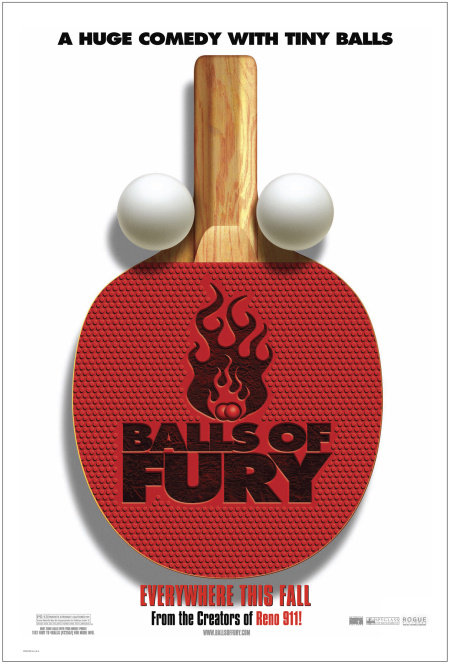