A delightfully bitchy black comedy adapted from David Gilman’s play “Ghost in the Machine,” by director Jonathan Kaufer. It is set in the college community of Cambridge, Mass., and is similar in tone to “Who’s Afraid of Virginia Woolf.” The ambitious, self-important, middle-aged musicologist, Matt Carroll (Rubinek), is presenting a new piece of research at Harvard and is invited to stay at the home of his girlfriend from twenty years ago, Nancy Westlund (Bedelia). Matt brings along his sexy much younger and brainy but arrogant sexual temptress girlfriend, Kim Matthews (Feeney), who is a computer whiz and has discovered by placing her boyfriend’s modern Austrian composer’s composition –“Cambodian Requiem” — through her computer program that two lines from a 15th century composition written by Martin Luther called “A Mighty Fortress Is Our God” has mysteriously been added. Matt’s lecture will be presenting this startling research, which he claims can only be explained as an act of God or else it’s a computer accident. In all probability, it would seem like a hoax. But Matt stakes his reputation on it being authentic and ignores that his game playing girlfriend could have manipulated the computer. Nancy is a complacent tenured musicologist professor at Harvard who is married for a long time to a prissy academic with a caustic attitude, Wes (Strathairn). He’s upset because he just learned that he’s been passed over for tenure by his small and little known college, which means he could even lose his position.

Matt tries to endear himself with Wes, but meets with hostility. Kim likes to play games that make others uncomfortable and tries to snare Wes. Wes is obsessed with Kim, but acts as if he detests her. Nancy tries to soothe things over to make the best of this weekend, and reveals to Matt that her married sex life hasn’t been what she hoped for. When the couple is quizzed why they don’t have children, Kim responds by asking Wes if he’s “firing blanks.” The bad manners really begin when Wes discovers he’s missing a $50 bill and thinks Kim took it. He gets his reluctant wife to search her room and she discovers a $50 bill concealed in her cosmetic case and takes it, assuming that it is her hubby’s. These four self-absorbed individuals can’t see themselves for what they are and what they have become. Their vulnerabilities are exposed and all are shown to be liars and capable of being greatly hurt when exposed. Wes’s lustful attraction to Kim is played out at first as a game and then for real. Nancy is shown to be willing to go for serenity and the creature comforts by preferring to lead a secure life over finding love and the truth. Wes hides behind his insecurities by acting verbally aggressive and outwardly manly. Wes opens the film by lecturing the chain-smoking Kim not to smoke in his house and when she puts out the cigarette in his antique incense holder, he berates her further. Wes seemingly gets a great deal of pleasure out of this, as does Kim. As a result, she even becomes more attracted to him. But perhaps the person with the most to lose on this visit, is Matt. As his lecture bombs at Harvard, his reputation becomes on the line.

Matt has one more ace up his sleeve and visits the editor of a prestigious academic journal, Professor Harper (Julie Harris). He has submitted a research article for publication describing his musical computer-generated marvel to her, and she bluntly tells him that it’s a ‘crock of shit.’

“Bad Manners” is dripping with sarcasm, sharp ensemble acting, an intelligent script, and a realistic rendering of the human comedy in academia. By the end of their uncomfortable weekend, their four lives have been visibly upset and the trust they have for each other has been broken forever. These intellectuals are left to only their intellectual devices to cope with their new problems, as they can’t solve their problems with the common sense it requires. Things are not right in academia. 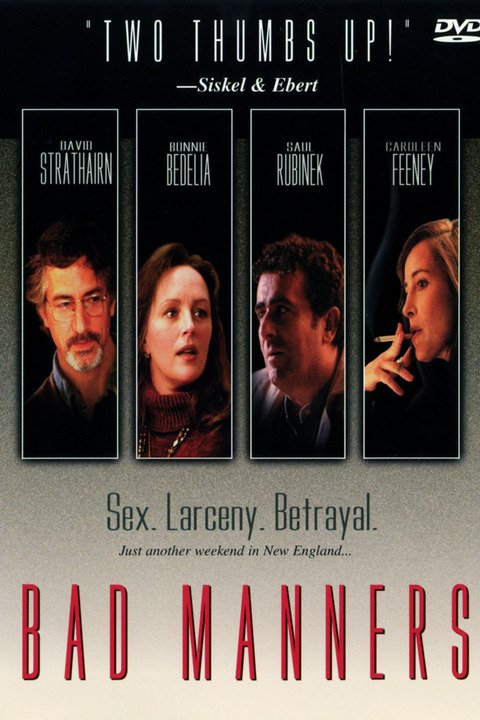 SHERLOCK HOLMES AND THE HOUSE OF FEAR