“A smart screwball comedy from the 1930s that’s given the Lubitsch touch by director Leo McCarey.”

A smart screwball comedy from the 1930s that’s given the Lubitsch touch by director Leo McCarey (“Duck Soup”/ “Going My Way”). Adapted from Arthur Richman’s play and penned by Vina Delmar. Jerry Warriner (Cary Grant) and Lucy Warriner (Irene Dunne) are a wealthy socialite Manhattan couple whose open marriage is being challenged because of lost trust. He faked a week trip to Florida to play poker with the boys. She spent the night with her male voice teacher, Armand Duvalle (Alexander D’Arcy), claiming their car broke down. Their suspicious natures leads to them filing for divorce. In court Jerry and Lucy don’t argue over money matters but over custody of their dog, Mr. Smith, as Lucy wins him by cheating in a contest arranged by the judge. Jerry will get visiting rights to the dog.

Aunt Patsy (Cecil Cunningham) is bored living with home-bound Lucy in her Manhattan suite, as she refuses to go out unescorted. Auntie meets neighbor Dan Leeson (Ralph Bellamy), a wealthy bachelor Oklahoma oil-man who lives with his overbearing prudish mother (Esther Dale). Auntie introduces him to her niece, and the two become an item. When Jerry visits the dog, he interferes with Dan’s house visit as he loudly plays the piano while the dog barks. Later at a nightclub Jerry is with showgal Dixie Belle Lee (Joyce Compton), and they join Lucy and Dan at their table. While Jerry makes fun of Dan as a hayseed behind his back, Dixie sings “Gone With the Wind” and shocks Lucy as a floor fan blows her dress up in an attempt to simulate the wind.

The story then goes on to voice its approval for monogamy by proving that the couple is better off staying married rather than in seeking new partners. Jerry has a quick fling with a spoiled heiress Barbara Vance (Molly Lamont) and Lucy realizes she doesn’t love momma’s boy Dan but only goes out with him on the rebound. As fate would have it the couple get together in her absent Aunt’s cabin. In separate bedrooms, they yearn for each other as an adjoining door opens and is reluctantly shut by Jerry, who then opens the window to see if the strong wind could open the door again. Only this time it’s blocked by a black cat perched there until shooed away by Lucy. Just minutes before the divorce becomes official, Lucy erotically suggests that a remorseful Jerry enter her bedroom and with that the cuckoo clock signals midnight and the couple are reconciled as the screen goes dark.

Though the story is slight, McCarey shows love to these wacky characters, the comic timing between Dunne and Grant is pitch perfect, and the dialogue is witty. It had been filmed twice before but this one, from what I understand without seeing those other versions, is the better one. 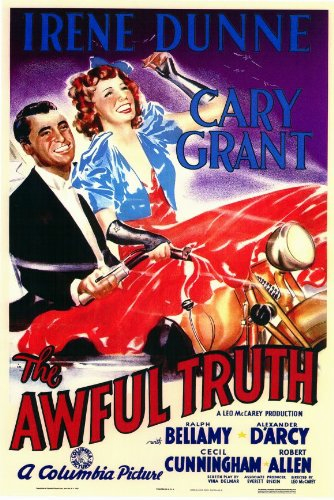 MYTH OF FINGERPRINTS, THE