“It’s a compelling watch, but moves no further than being an exploratory film about Crane’s demise due to his sex addiction.”

Paul Schrader’s (“Affliction“) Auto Focus is a skillfully directed biopic about the rise and fall of the television actor Bob Crane (Greg Kinnear), who was best known for playing Hogan from 1965 – 1971 on the television show Hogan’s Heroes. It’s a compelling watch, but moves no further than being an exploratory film about Crane’s demise due to his sex addiction without offering any further revelations into his lurid downfall than either the obvious ones about his temptations for money and fame. Crane is a church-going Catholic but because of his moral decline he becomes a lost sinner, which is the dark territory Schrader’s film covers. Crane’s sexual obsessions overtook his career ambitions, as he goes from being a naive but likable figure to an obnoxious sexual deviant with a compelling need to boast about his tawdry exploits. What makes the film seem special even if it’s ordinary, are the creative performances by the leads. Kinnear’s ability to get into the head of the once wholesome Crane keeps me tuned into the story. Crane and Dafoe formed a destructive relationship built around their pornographic needs and their inability to relate with others except on a superficial basis. Dafoe allows his smarmy character named Carpenter, or Carpy as he likes to be called, to be portrayed in as sympathetic a light as possible, as he’s always viewed as a yes-man and secondary figure who is used by others without regard to his feelings. The other noteworthy performance comes from Ron Leibman as Crane’s agent. Leibman takes a role that usually is a stereotyped one and brings a sensitivity to it. The agent shows in his restrained performance that he wanted to help the likable Crane but counseling wasn’t his strong point. Leibman could only help by getting his client jobs, as he tried to project him as the next Jack Lemmon.

Crane started out as a drummer and worked as a host on a Bridgeport, Connecticut radio talk show and later became a popular disc jockey for a morning drive-time radio show in Los Angeles. His agent Lenny (Leibman) got him his big break by steering the reluctant Crane to take the part of Hogan in a silly Nazi POW camp sitcom comedy on CBS, something Crane and his homebody wife of 15 years Anne (Rita Wilson) weren’t sure the public would accept as being in good taste. One should never underestimate the public’s bad taste, as Hogan’s Heroes turned out to be a big hit.

On the set of Hogan’s Heroes, Crane meets Carpenter, and the electronic guru gets the celeb interested in the first home video cameras from Sony. The two used this new technology as a lure to bring girls back to Carpy’s pad and to get them to appear on tape while engaging in obscene sexual acts with or without them realizing it. Things got so out of hand for Crane that his wife divorced him and was given custody of their two children. Crane next married his co-star on Hogan’s Heroes, Patty (Maria Bello). There’s was an open marriage, where both fooled around. But when Patty became pregnant, she wanted more time with her party boy hubby. This marriage also ended in a divorce and Patty got custody of his son.

Things for Crane start going from a dream come true story to a nightmare, when Hogan’s Heroes gets cancelled in 1971. Word started leaking out about his wild sexual activities and Crane didn’t help himself by making tasteless sexual remarks in public. As a result Crane’s public image as a choirboy type was damaged and the only gig Lenny could get for him was in playing the traveling dinner-theater circuit. Crane is reduced to reliving his Hogan part and living off his former fame as if were stuck in a time warp.

By the time in 1978 Carpy delivered the fatal blows to Crane’s skull with a tripod as he slept in a Scottsdale, Arizona motel, Crane had turned so dark and remained so uninteresting of a personality that his death had no affect on me other than feeling no one should be brutally murdered. That his murder was never solved, reflects badly on the shoddy police work. In the film, the reason given for Carpy’s sudden burst of violence is because Crane was going to leave their unholy partnership and try to reclaim his life.

What does this comic look into the pitfalls of celebrity and of obsessive-compulsive behavior and of Hollywood pop culture all mean? For me, it didn’t mean much. There was no search for salvation, as in some of Schrader’s better films. The film seemed to hardly register as anything but a joyless voyeuristic experience, that is played by an actor who plays Crane better than the real one ever could. 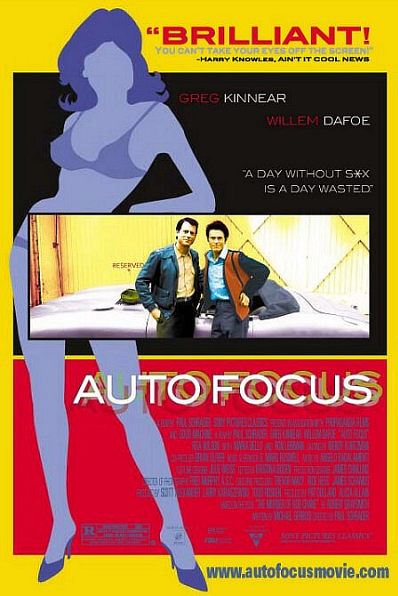