“Drags until coming alive in the last act.”

A popcorn movie with a familiar save the world theme about aliens invading under the North Pole. Here the military is glorified for its efforts despite its diverse opinions about war. The sci-fi film is adequately helmed by Spencer Bennet(“Devil Goddess”/”Killer Ape”/”Mysterious Island”), remembered mostly for directing serials. The nonsensical story by Jack Rabin and Irving Block is clumsily written by Orville H. Hampton. It’s told with a narrator (Pat Michaels), aping the seriousness of a documentary, the film drags until coming alive in the last act. The brave members of an American nuclear sub climb aboard a flying saucer and fight off a hairy cyclops with tentacles and powers to burn to death its opponents.

After several American ships are destroyed near the North Pole, an atomic submarine, the Tiger Shark, captained by Dick Foran, is sent to the area to investigate. The findings indicate an underwater flying saucer is responsible. Aboard the atomic sub, the intrepid gung-ho officers (Arthur Franz) has a hostile relationship with his pacifist bunk-mate, the genius oceanographer(Brett Halsey).

The B film evokes a tense and cheesy 1950s atmosphere and reflects on America’s paranoia over being invaded by aliens. If you’re a fan of such hokum sci-fi scare films, this well-made one has plenty of colorful characters, campiness and odd pleasures to glean. 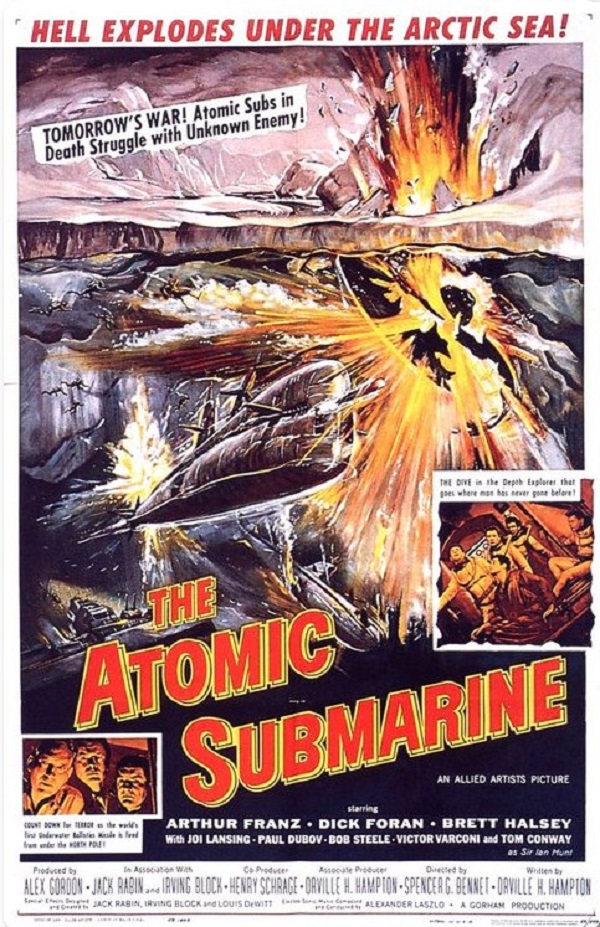 RIDERS OF THE WHISTLING PINES