Louis Malle’s (“Pretty Baby”) Atlantic City is a moody character study crime drama and part love story and comedy. The screenwriter is playwright John Guare (House of Blue Leaves). It’s set in a modern Atlantic City that has seen its better days when gambling was illegal and it was called ‘the lungs of Philadelphia,’ but the city is optimistic now about a comeback with legal gambling. Elegant old hotels and buildings are being demolished to make way for the new casinos, while a large part of the town remains squalid. Lou (Burt Lancaster) is an elderly number rackets runner for small-time African-American operator Fred and is caretaker and occasional stud for the bedridden widow Grace (Kate Reid), who lives in his same, once chic but now decaying, apartment building just off the Boardwalk. Grace’s small-time gangster hubby was Lou’s pal, killed on the Boardwalk a number of years ago. Lou allows himself to be bossed around and made to be a flunky by the shrewish woman. He remains stuck on the past as the glory days and becomes delusional by pumping himself up to be a big-shot gangster in those days even if in reality he never amounted to being much more than a petty criminal.

A Saskatchewan couple, sneaky thief Dave and his naive flower-child pregnant girlfriend Chrissie, head for Atlantic City to sell the dope Dave stole from mobsters in a drop-off at a Philadelphia phone booth. The couple visit Oyster Bar waitress Sally (Susan Sarandon), who is Chrissie’s sister and the wife of Dave. Since Dave ran away with her sister and his criminal record ruined any chance of her getting work in a Las Vegas casino, Sally is not pleased to see them but gives them one free night of lodging. Sally is aspiring to better herself by attending a casino run dealer’s school where she’s learning under the tutelage of suave Frenchman Joseph (Michel Piccoli) how to be a blackjack dealer, speak French and develop an appreciation of culture. Sally yearns to work her way into being a dealer in Monte Carlo.

When Dave contacts Fred to hook him up with the right people to see about selling the cocaine, Fred is leery of dealing with the hippie looking youngster in this tightly run town where appearances count among gangsters. Since Dave is staying with Sally, who lives next door to Lou, the old-timer and the youngster get together. Their artificial friendship results in Lou being talked into unloading the dope, for a cut in the profits, to the mobster (Al Waxman) recommended by Fred. Playing it safe with the Philly mobsters, Fred informs them Dave stole their drugs. The two Philly hit men knife Dave to death, while Lou sells the dope to the mobster and feels exhilarated he pulled off the deal of his life and at last has some money to play around with to act like a big-shot.

A beautiful tale evolves of the lonely youngster Sally and the aging Lou coming together and living out their dreams. It’s played out against the dealings with the mob and the big changes taking place on the Boardwalk. There’s a warmth and gentleness about how Malle treats these easy to make fun of figures, as he connects their personal aspirations with the mundane ones held for Atlantic City.

The film has many delicate small touches that bring out so much of the character’s desperation. In one such scene, Sally every evening puts on an opera record and washes her hands, breasts and body in lemon juice to get rid of the fish smells while Lou spies on the unsuspecting woman from his nearby apartment window. This takes place before they meet and form a relationship that is the heart of this pleasingly unsentimental movie. 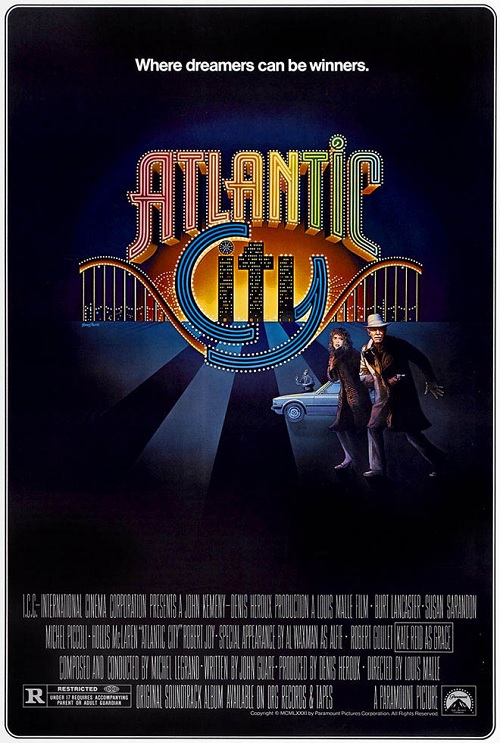